Skip to content
“We are transforming Boston Court into a neighborhood where people want to live and not where people have to live” Don Erler, president of Louisville Fuller Center said at the dedication of 5 homes in the Shawnee area of Louisville. The Derby City Build brought together 100 volunteers during the week of March 14-17 and included 75 out-of-town volunteers—32 were students on their spring break.
Louisville Fuller Center is developing what they call a “Neighborhood of Choice” plan where Fuller Center works with local churches and groups to impact a neighborhood that needs special help. When the Fuller Center started some three years ago, the leaders went to the city and asked “where can we do the most good"? They were told Boston Court. Boston Court at the time was over grown and many houses were abandoned. The first thing Fuller Center volunteers did was came in and cut the grass and pick up trash. They then identified what properties were owner-occupied and what properties could be donated. A private investor donated the first house and the Fuller Center renovated it and found a homeowner for the one-bedroom shotgun style house. That homeowner is now a proud part of the community. He spent his day off working with the volunteers during the Derby City Build. 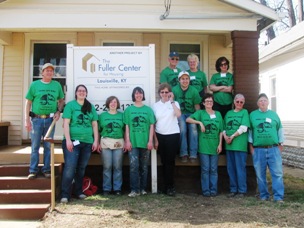 Since the first home, Fuller Center has identified several other homes to acquire. They have cleared some old homes that were not salvageable. Boston Court is similar to the “New Urbanism” concept that is once again popular. Homes all face a sidewalk that runs the length of the court. Alleys are in the rear for parking and services. The dominant feature on the front of each home is the porch and not a garage. Neighbors can get to neighbors easily.

The city put in a new sidewalk that helps tie the neighborhood together. The neighborhood is really starting to take shape. One new home was worked on during the Derby City Build, two ReNew homes and two owner-occupied Greater Blessing projects were part of the mix. All but one were on Boston Court. The one exception was a ReNew house less than a block away on 41st Street.

Boston Court is rapidly on its way of becoming a Neighborhood of Choice!