“Sometimes you have to put legs on your prayers,” Robert Abel recently wrote, quoting a message he heard from his pastor. 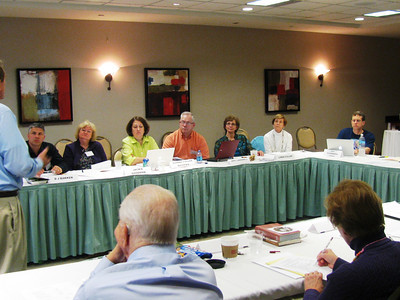 “Perhaps this is one of those situations where I need to ‘put legs’ on my own prayers by agreeing to serve in a new way through The Fuller Center for Housing board to help further the Fuller Center mission.”

Abel, Don Erler and Todd Sloan were all elected to serve on The Fuller Center’s 20-member international board of directors during the third annual covenant partner conference in Louisville, KY, March 19 and 20.

Each of the new members has specialized leadership skills, a unique background, and strong commitment that will help ‘put legs’ on the organization’s mission to provide decent housing for people in need around the world.

“We are fortunate to have such a committed group of extraordinary members on our board,” David Snell, president of The Fuller Center, said.

Abel, who retired in 2001 from his position as a senior auditor for the Department of Health and Human Services, served as a member of The Fuller Center’s advisory council for two years and was highly involved with Habitat for Humanity in a variety of roles for eight years. He also served as a founding board member for H.O.P.E. (For All), a non-profit organization based in Maryland.

“Continuing to serve in Millard’s footsteps as a Fuller Center board member is a personal honor,” Abel said. “I frequently pray for the resources and opportunities that will allow the Fuller Center for Housing to remain true to its Christian roots and founding principles while finding greater awareness among the world’s populations.”

Todd Sloan and Don Erler have equally extensive professional and volunteer experiences that prepare them for their new roles.

Sloan is currently a district sales manager for Linear Technology Corporation in Ohio and has served as an advisor and spokesman for the Cleveland Pregnancy Center, and as a volunteer, donor and advisory board member for The Fuller Center.

“I have a heart for the ministry, I have seen firsthand the impact on the people it helps and I have some experience and skills that can help advance the cause,” he said.

Erler has 24 years of experience in public, private and government accounting, law practice, and commercial real estate brokerage and auctioneering. He is currently a senior advisor and real estate auctioneer for Sperry Van Ness/Ward commercial group.

He has also served as the president and chairman of The Fuller Center in Louisville for the past two years. Members of this covenant partner recently hosted the Derby City Build, a four-day effort to renovate five houses for residents in Louisville. This build is part of an ambitious initiative to build or repair 1,000 houses there in just 1,000 days.

“We have pledged to become an example to be followed by other covenant partners,” Erler said. “As a member of the national board, I would hope to be able to promote this strong ethic with current covenant partners and to encourage these kinds of housing ministries in all our US cities and in many locations around the world. Together, we can all really make a difference in the lives of the truly working poor here and abroad.”