The Combined Federal Campaign is the world’s largest and most successful workplace charity campaign — raising millions annually for more than 20,000 nonprofits, including The Fuller Center for Housing.

The CFC allows federal workers — including military personnel — to designate a portion of their salaries to be donated to charities of their choice. These pledges are made each year from Sept. 1 to Dec. 15.

During this pledge period, many military installations hold CFC kickoff celebrations to encourage people to support nonprofits. At many of these celebrations, nonprofit groups such as The Fuller Center are invited to appear and have a booth where a representative can hand out promotional material and talk with people about their mission.

Of course, with dozens of events going on around the nation in a short period of time, The Fuller Center for Housing cannot be represented at each event — well, unless we had some help.

YOU can volunteer to tell our story at these events. If you live near a military installation or other federal government entity holding a CFC kickoff event, you could be the person to represent The Fuller Center. We are looking for people who understand the basics of our Christ-centered, grass-roots mission and who would embrace the opportunity to tell our story. People connected to local Fuller Center covenant partners or those who have volunteered with The Fuller Center anywhere would be prime candidates.

“Having attended one of these last year at Fort Benning, Ga., I can tell you that going to such an event is really a positive experience,” Fuller Center Director of Communications Chris Johnson said. “It really is a celebration of giving, and you get to meet a lot of leaders in our armed forces, from generals on down to platoon leaders. This is 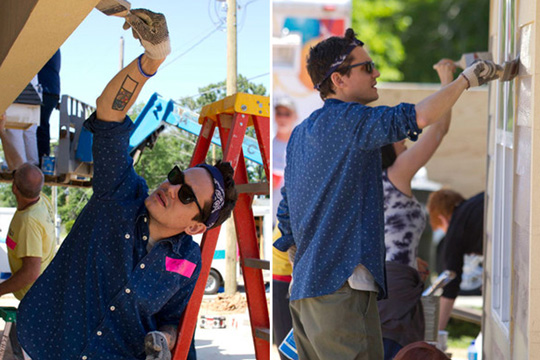 a fun time for them, and it’s an opportunity to not just tell our story, but also to thank the brave men and women who serve our country.

“Participating in the Combined Federal Campaign is not mandatory, but it is highly encouraged,” Johnson added. “When your civilian boss encourages you to be giving, that’s one thing. But when you’re boss is a military leader who outranks you, well, let’s just say that makes it an even greater opportunity for us and other nonprofits. If you’ve ever heard a drill sergeant be encouraging, you know what I mean.”

Because military personnel are prevalent at CFC events, The Fuller Center is shining a spotlight on its work for veterans and encourages any volunteer representatives to visit FullerCenter.org/veterans to familiarize themselves with some of The Fuller Center’s recent efforts for veterans. There, you also will find a downloadable 8.5-by-11-inch handout you can distribute, as well as a video about our work with veterans that you can watch or share.

"Even if you can’t volunteer to represent The Fuller Center at an event, be sure to tell all your friends who are federal employees about The Fuller Center," Johnson said. "If they just take a look around FullerCenter.org or our Facebook page, I think they’ll like what they see. Our hand-up approach to helping people — the whole concept behind partnership housing instead of handouts — really resonates with folks who work hard and like to help other people who are willing to work for their blessings."