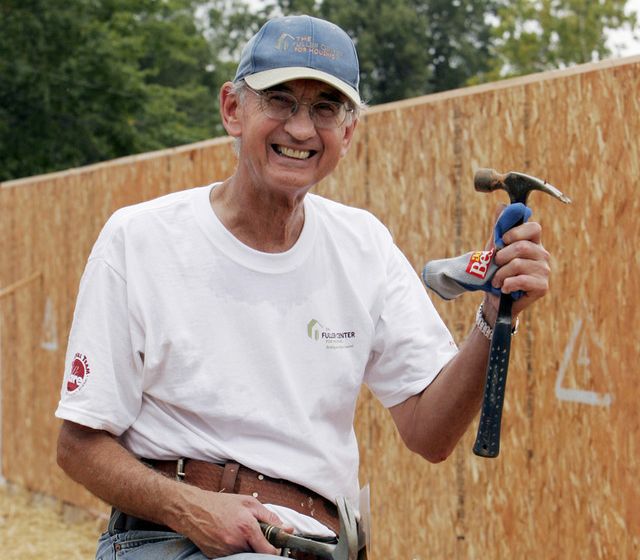 In various ways all of us should be constantly finding people and situations that are dead, buried, and covered up in order to help bring them to the light because the God that we service is a God of light, a God of love, and a God of caring.

When Millard Fuller founded Habitat for Humanity with his wife Linda in 1976 after testing the concept of partnership housing in the heart of Africa’s Congo for three years, his dream was that Habitat would someday be as well-known and recognizable as the Boy Scouts of America.

Millions of people around the world now have simple, decent places to live thanks to the affordable housing movement that he and Linda launched.

But as corporate influence began to infuse Habitat’s board of directors — no doubt with the best of intentions — Millard’s inclination to take leaps of faith and his unwavering commitment to the simple, not-so-corporate Christian roots of the ministry led to conflict. As those clashes worsened into the early 2000s, the board fired Millard and Linda from the ministry they had built and loved in January of 2005.

While Linda was disheartened and having what she now remembers as a “pity party,” Millard wanted to make sure that Habitat’s thousands of affiliates across the United States and around the world knew that he still supported their efforts. Millard told Linda that he couldn’t find the word “retirement” in the Bible, so The Fuller Center for Housing was founded as a vehicle for him to continue visiting these affiliates to inspire them to continue their work and to help them raise the necessary funds.

The concept of an ousted Habitat leader working as a Habitat advocate, however, was bound to meet opposition — and it quickly did. The invitations from affiliates began to dry up. Then, a disaster changed everything.

Millard got a call from Community Renewal in Shreveport, Louisiana. The city’s main stadium and other locations were packed with evacuees from Hurricane Katrina. He was asked to come and help build affordable homes in the city. He agreed and began building in typical Millard fashion — in what was considered a “hopeless” neighborhood of crime and blight, Allendale, where city officials and police advised him not to work because they could not guarantee safety. (Fifty houses later, major crime plummeted 83 percent, and Allendale is now a neighborhood of choice.)

When the word got out that Millard was building again, the phone began to ring off the hook. The Fuller Center began its first international building project in Nepal and then partners began to multiply across the United States and around the world. More than 25 Habitat affiliates have since switched their affiliation to The Fuller Center. (Related Story: “Why did we switch to The Fuller Center? Groups cite grass-roots principles, local control”)

Millard worked until the day he died unexpectedly of an aortic aneurysm on Feb. 3, 2009. The decision was made to continue Millard’s dream of helping families have simple, decent places to live with his long-time friend and colleague David Snell as president. David and the board reiterated their commitment to The Fuller Center’s foundational principles, and the ministry continues to grow.

Linda recalls that the four years leading The Fuller Center for Housing “were some of the happiest years of his life because he was able to get back to doing what he loved — and doing it as an expression of his deep Christian faith.”

Our commitment to Millard’s “Theology of the Hammer” has only deepened over the years, and we will never stray from our grass-roots, Christian principles.