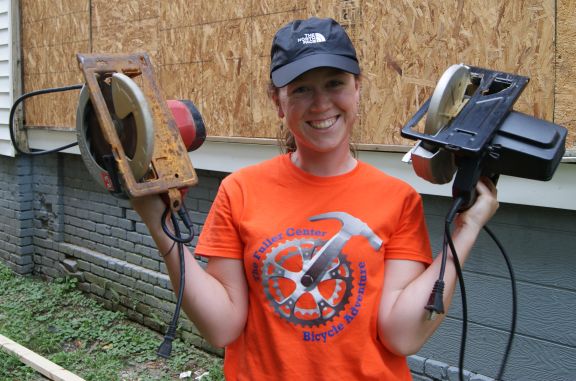 After a productive build day yesterday, the biking crew left Kinston, N.C. Perry Fun Farm between 6:30 and 7 am. The breakfast crew made french toast for breakfast and we all felt refreshed and energized. We were very resourceful and made the french toast out of the leftover hamburger and hot dog buns!

Tom led the initial bike segment and we rode as a group until the first rest stop. Tom is a great leader and set the pace around 16 mph. It is fun to ride as a group because everyone chats, encourages each other, and comments about the interesting scenery. After a quick rest stop, a couple others and I scooted off to find a bathroom in the next town.

Surprisingly, we met up with the rest of the group after getting back on the rode. During this segment, Alyssa and I chased the lead group. We alternated being in the front and kept the pace between 18-21mph. During the next 10 miles we had a couple of experiences with dogs, which always gets the blood pumping.

After the second rest stop, most of the girls in the group rode with Tom and we sang songs! We sang country songs, Disney songs, oldies, camp songs, church songs and even made up songs. The miles seemed to fly by as we sang, laughed and made memories.

Seems that the Bike Adventure crew has settled into a consistent rhythm. We wake up, eat, bike, eat, bike, eat, shower, eat, sleep and repeat. It is hard to believe that we are already halfway. Each of us has grown stronger physically, gained self-confidence, increased our sense of direction, formed relationships and seen what amazing things God is doing in the hearts of those we meet along the way.

So as we embark tomorrow on the second half of the East Coast Bike Adventure I thank all that have been reading the blog, praying for us, have helped us in the past and that will help us in the future!