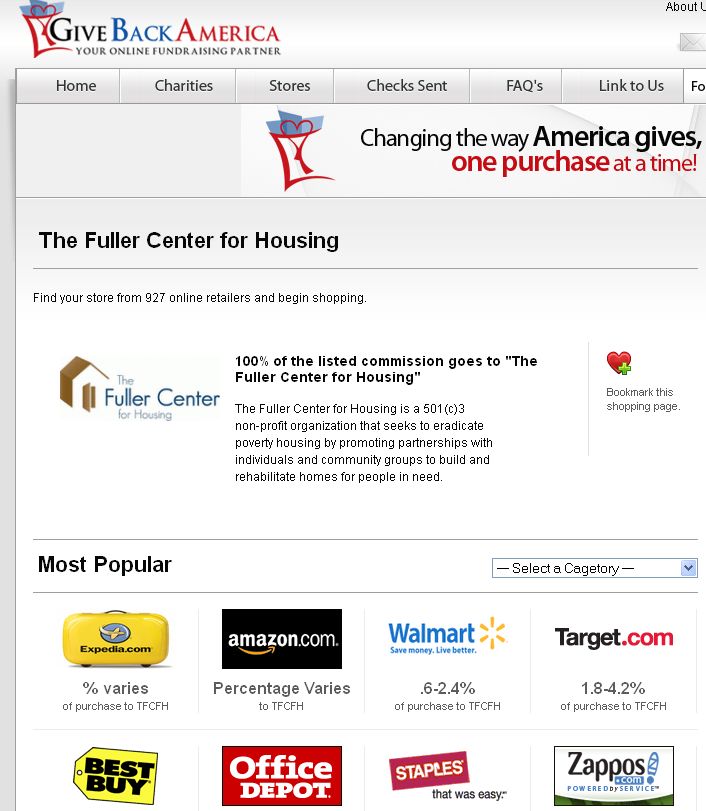 I learned a couple new things this week. I know — I’m amazed, too! I thought I had quit learning new things midway through eighth grade!

One of the things I learned was very good. I knew there were online shopping portals out there that helped nonprofits like The Fuller Center, but I had no idea how many retailers were involved. Starting at these sites, you can designate your favorite nonprofit — The Fuller Center for Housing, naturally — to receive a small percentage of the transactions you make at many shopping sites.

These include major retailers like Amazon, Target, Wal-Mart, Best Buy, Sears and literally hundreds more. It also include specialty retailers dealing in everything from candy to flowers to pets to gifts for the science fiction geek in your family.

Once you select The Fuller Center as your charity of choice, the portal sends you to the regular sites to do your shopping. It’s just a brief stop beforehand that allows us to receive a small percentage (usually 3-6%) to help families in need. And this comes at no cost to you. It is not added onto the price, but is take from the retailer’s revenue. It’s definitely the easiest way to give. And, hey, anything that keeps me from having to fight shopping crowds makes me happy!

Click here to see just how easy this is!

The other thing I learned hardly put a smile on my face. I’d heard of the Armenian Genocide but had no idea how horrible it was — possibly because my own country has yet to officially recognize the events of 1915-23 as a genocide. To me, that’s a lot like not officially recognizing Mount Everest as a mountain. It’s pretty doggone obvious to me.

Our covenant partner in Armenia is our most productive — internationally or domestically — having helped more than 600 families know the joy of having a simple, decent home. And now they are marking this tragic time in the nation’s history by building 100 homes to mark 100 years since the genocide. The effort runs through the end of 2015, which will be 100 years since the start of the genocide.

To promote this effort, I had to brush up on my knowledge about these horrific events, and it was worse than I knew. The photos I saw of people dying and starving were unsettling, as were the estimates of those killed during the genocide — estimates ranging from 1 million to 1.5 million. And that’s from a very small country.

As Armenia was the first nation on Earth to establish Christianity as a state religion, it is fitting that a Christian housing ministry is mounting such an effort to remember a tragic time when families were torn apart by building up families. And the home is the foundation of the family.

Please click here to learn more about the Armenian Genocide and this effort they’re calling “Honoring 100 Years By Saving 100 Families.”