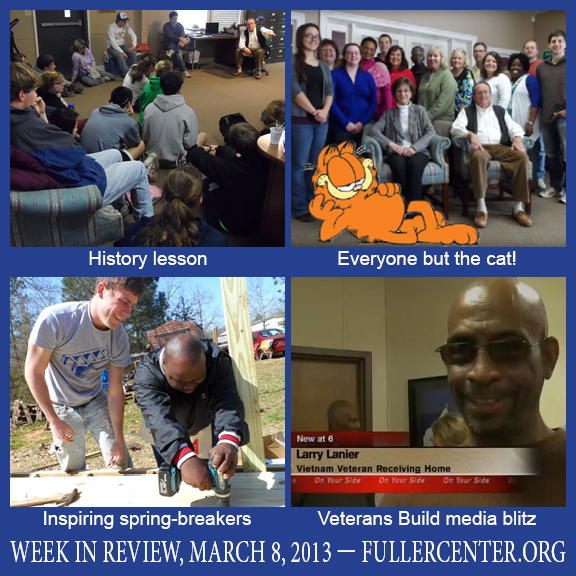 I’m one of those people who suffers from the winter blahs — or as some officially refer to it, Seasonal Affectiveness Disorder. Although, I’m sure many people would tell you that’s just one entry on a long list of disorders to which I can lay claim.

It happens every year. The days get shorter, the nights get longer and it’s too darn cold. And, yes, I live in Georgia where 50 degrees is considered an Arctic blast. I know some of you from Minnesota and Wisconsin are saying, “Fifty degrees! Ha! That’s swimsuit weather up here!” Well, 50 degrees is parka weather down here!

But we are now on the cusp of spring (WHEW! — that came from my wife, who has to live with me during the blahs). A sure sign of spring is when college kids start flocking to the beaches to party it up. That’s understandable. But an even better sign of it at The Fuller Center is the steady flow of college students who are more interested in service than partying.

That doesn’t mean they don’t have fun, mind you. I can tell you first-hand that in the midst of all their work this week on projects with the Americus-Sumter Fuller Center for Housing here in our backyard, students from Ohio University and Georgetown University had plenty of fun. Obviously, they get great joy from serving others. I’m sure that’s the case for all 16 college teams working with various Fuller Center covenant partners this month. (The Ohio students explain why they do this in a story you can read by clicking here.)

Students from both schools were enthralled Tuesday morning as they heard Fuller Center President David Snell tell the story of Millard Fuller — how he became a millionaire then turned to a life of service in founding Habitat for Humanity and then going back to the biblical roots of his affordable housing ministry by founding The Fuller Center for Housing. I understand why they were so enthralled; it’s a story I’ve heard many times now, and it’s a little unbelievable … except for the fact that it actually happened.

We also had a rare moment that afternoon here at headquarters — our entire staff gathered for a meeting. Granted, we don’t have a lot of overhead or a massive staff, but getting these 16 busy staffers and full-time volunteers together at once is quite the rarity. David decided that required a photo. Of course, someone pointed out after I sent everyone the official picture that we didn’t have ALL the staff in the photo because Fuller Center cat D.C. couldn’t be corralled for the shot. So I did the best I could to fix the situation by Photoshopping Garfield into a second pic for those who needed a cat in it. Getting this team together at once is as invigorating as having the spring-breakers in town.

I’m trying to keep everyone updated on media coverage of our activities across the nation on our website, FullerCenter.org. There’s a lot out there, and some stories slip under the radar. But the 2013 Veterans Build in Shreveport is getting a ton of coverage (see it here), and our covenant partner in Harrison, Ark., get good coverage in their local paper (see it here) of a house move for their first Save a House/Make a Home project.

Among the folks I had a chance to chat with this week are Rocky Powers of Greenwood, Miss., and Ervin Mrosek of Lorain County, Ohio. Rocky’s group is working with the city to put a large group of beautiful Katrina FEMA cottages into the Baptist Town area where they work, and Ervin is getting great response to the Save a House/Make a Home initiative in his area. You’ll hear more about those stories soon.

And don’t forget that our Bicycle Adventure’s 400-mile Spring Ride begins in just over a week. They begin gathering one week from today in Nashville. (Please click here and find a rider to support.) They’ll working hard and having fun, too. Help them help others.

Well, I gotta wrap this up. The sun’s out, and I’m gonna run outside and tell him how much he’s been missed!