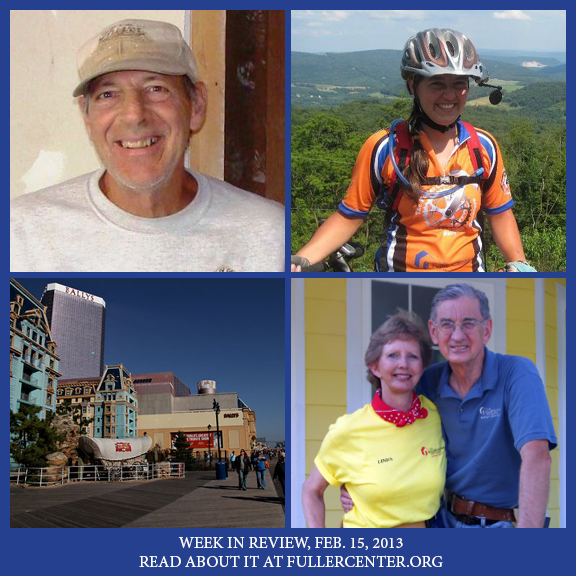 By Chris Johnson,
Director of communications

I never knew Al Newkirk, but he sounds like the kind of guy I really respect. He was a modest man who quietly went about his work. A devout Catholic, he believed as Millard Fuller did that “Faith without works is as dead as a doornail,” which, of course, has its roots in the Bible.

Al was a longtime supporter of Millard, back to the Habitat days. That’s when he got to know current Fuller Center President David Snell, as well. Al’s great affection for Millard and The Fuller Center is why his widow, Kathy, donated his impressive collection of tools to The Fuller Center. It’s a story I was happy to tell on Monday. And Kathy was so sweet when I talked to her over the phone, and her love for her husband and this ministry was evident in her words. You can read the story here.

Today, in Webster Parish, La., our Fuller Center covenant partner there is dedicating its 50th new house. I spoke this week with new executive director Derek Melancon. Derek is a sharp guy who has both marketing and tech savvy, and that’s going to help them grow even more upon the firm foundation laid by his predecessor, Charlie Park. Read more about the 50-house milestone here.

Meanwhile, it’s been a kind of quiet week here in the office with several folks heading here and there — including Director of U.S. Field Operations Kirk Lyman-Barner having journeyed to Philadelphia and then New Jersey, where he is working with our New Jersey Pines covenant partner to hammer out details for the upcoming Millard Fuller Legacy Build. And, by the way, today is your last day to get the early-bird Legacy Build registration rate of $175, so sign up today! Click here to learn more.

Now that there’s just a month before our Fuller Center Bicycle Adventure’s spring ride gets under way, I started today by chatting with Adventure leader Melissa Merrill. Check out what she had to say about the trip and its fundraising success.

Oh, and I can’t forget it was Valentine’s Day this past week. During my search for love-related material to share on Facebook Thursday, I stumbled across this Millard video in which he tackles the subject “What is love?” Not too many folks can handle that subject in less than two minutes, but he does in this clip below that was produced by someone outside The Fuller Center ranks. It’s worth a look. You’ll love it.