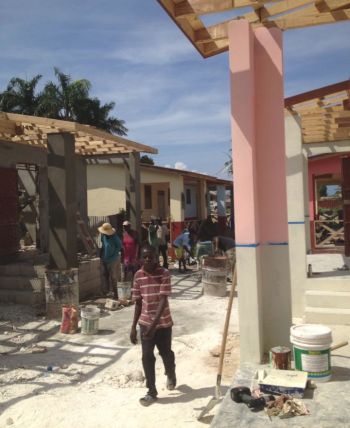 Today, we dedicated four new homes in The Fuller Center’s Lambi community in Haiti, where Kaye Hooker and Joe McBride have co-led a Global Builders trip this week. That brings us to a total of 110 new, safe, attractive, decent homes for families in Haiti.

Unfortunately, it’s been such a tremendously busy summer of building in Haiti that we surged past the 100-home milestone faster than we could mark it. Oh well, I guess it’s better to have 110 than 100, and I like to be different anyway. So, we’re marking the 110-home milestone, as you can see in the video at the end of this blog.

You can also read about it in this story, where you’ll find an amazing statistic — with just 12 percent of all the money donated to Haiti after the quake, The Fuller Center could have rebuilt all 200,000 homes damaged in the quake. That stat ought to jump out at you, especially when you see the hundreds of thousands of Haitians still living in tent cities more than three years after the quake. It’s also a testament to our effectiveness as a grass-roots organization without a lot of bureaucracy and overhead.

And we’ve got such a dedicated corps of volunteers, generous supporters and growing partnerships in Haiti that I have a feeling I’ll be doing a lot more milestone stories. I’ll try not to miss numbers 200 and 500.

On a completely different note, earlier in the week, I got a message from someone in Australia who wants to be involved in Fuller Center work there. But she was concerned that she would not be welcome because she does not consider herself religious but wanted to show love for others through the building of homes. I assured her that while we are, indeed, an unashamedly and unabashedly Christian housing ministry, Millard Fuller insisted we have open arms for all those who share the belief that everyone ought to have a decent home. (As a Georgia Bulldogs fan, I tried to get The Fuller Center to tweak that whole “everyone is welcome” culture and at least ban Florida Gators fan, but President David Snell wouldn’t go for it.)

It was a good reminder that those of different faiths or even no faith may be just as interested in showing love for others through our ministry. Besides, we know God is working through them, even if they don’t realize it. So, who are we to judge?

On Thursday I visited Fort Benning, where I had a chance to meet with some of our service personnel. They were holding training sessions for the Combined Federal Campaign, and The Fuller Center is one of the options they can choose for donating a portion of their paycheck every month. If you know a federal employee who can contribute to the CFC, please let them know how we can put their donations to good use.

Today, while President Snell was up north talking to folks interested in bringing The Fuller Center into their communities, we entertained a group interested in bringing The Fuller Center to South Africa. Louis Green, who served 15 years in South Africa’s Parliament, is spearheading the effort to organize a covenant partner there. I hope he finds the support he needs at home to make it happen — and he’s a pretty passionate fellow, so I believe he will find all the support he needs.