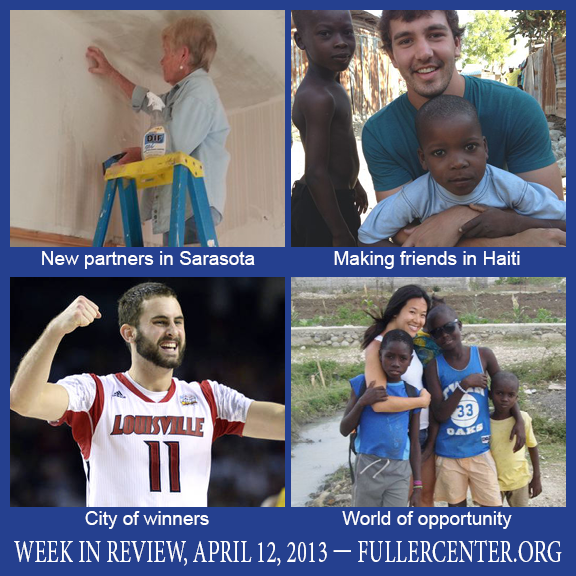 I began this week the way millions of Americans did — by watching one of the greatest NCAA men’s basketball championship games in history as the Louisville Cardinals topped the Michigan Wolverines for the title. The next night, their women’s team came up short in the women’s title game against Connecticut. Having two basketball teams from the same school play for titles on back-to-back days is pretty incredible, even if they couldn’t pull off the sweep.

During the second half of next week, I’ll be in Louisville. Fuller Center board member Don Erler of Louisville tells me that there is no chance the excitement will have abated by the time I get there. But I’ll be there for something equally exciting and way more important. I’ll be there to document the work The Fuller Center for Housing of Louisville is doing in restoring vacant houses into decent homes for families. They’ll be working on and dedicating five Save a House/Make a Home projects during the Mayor’s Week of Service. I’ve never been to Louisville, but I feel like I know the Shawnee neighborhood from all the pictures I’ve seen from there. I’m eager to witness how The Fuller Center has resurrected this once written-off neighborhood.

I’ve never been to Sarasota, either, but maybe I’ll have a good excuse to go now that we’ve inked a new covenant partner there. It’s new, but the roots trace back to when its president served on the Mennonite Economic Development Associates board with current Fuller Center for Housing Chairman of the Board LeRoy Troyer. Click here to see yet another example of how these connections (President David Snell calls them “providential confluences”) keep popping up.

Earlier this week we shared this photo of Micah Shields on our Facebook page. It’s from a Palo Alto University Global Builders trip to Haiti. Because Micah is a graduate of Valparaiso University, we asked if we could share his story with Valpo … especially since he’s wearing a Valpo shirt in some of the photos. Here’s some of what Micah had to say:

“I’m finding it hard to express just what my week in Haiti meant for me and the group I was with,” wrote Micah, who is pursuing his doctorate in clinical psychology. “It was no doubt one of the most powerful experiences of my life. Although only there for a week, I felt truly immersed in the culture. Our guide, Jimmy, did an amazing job of showing us as much of Haiti as possible.

“We spent our days doing physical work, building a home alongside the family whom we were building it for,” he continued. “In the afternoons, we were able to see other parts of Haiti, everything from the mountains and beaches to the capitol. One of the most powerful experiences was visiting the orphanages and holding these children who were so desperate for a human connection. During the evenings, we were able to decompress and have incredibly meaningful group discussions and really talk about what we were doing in Haiti and what it really meant.”