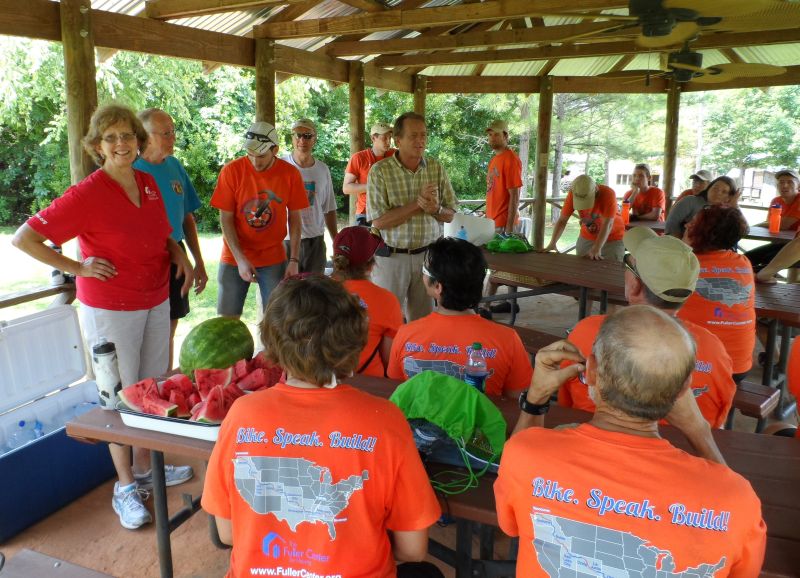 We were thrilled to have more than two dozen Fuller Center Bicycle Adventurers roll into Americus this week for the first build day of the 2013 summer ride — a little 3,700-mile jaunt from Savannah to Vancouver.

Their labor in repairing the roof of a storm-damaged Habitat home will allow a resident to return home for the first time in five years. (Click here to read about it.) And today they are in West Point, Ga., working with the busy Chattahoochee Fuller Center Project of Millard Fuller’s hometown of Lanett, Ala. (adjacent to West Point) to repair the home of a veteran.

Remember, these are cyclists, not rolling construction workers. Yet, they prove that what drives the success of our construction projects is not carpentry experts but willing volunteers. As people who are giving up two months this summer to ride 100 miles one day and work all day the next in Southern heat and humidity, I’d say our Bicycle Adventurers definitely qualify as willing volunteers.

This diverse group of folks also reflects what we see out in the field — conservative and liberal, religious and “spiritual but not religious”, male and female, pierced and tattooed and straight-laced and clean-cut. Usually when you get this kind of diversity together in America these days, angry sparks fly. Not in this case.

But that’s one of the things I like best about The Fuller Center for Housing — it brings folks together for a simple, common cause: affordable, safe, decent housing. We have an amazingly diverse group of supporters and volunteers, and they love each other. They may be foes at the ballot box, but they’re friends at Fuller Center work sites.

We need more of this in other areas — in schools, communities and, yes, in our government. Well, at least we have one shining example of folks pulling together with The Fuller Center. And thanks to a group of orange-clad cyclists, more people will know about The Fuller Center’s philosophy of offering a hand up instead of a handout. After all, that’s probably why folks of all types like us — because no one is against helping people help themselves.