When The Fuller Center for Housing of Webster Parish dedicates its 50th new home at 1 p.m. CST Friday for homeowner partner Nancy Windham, it will celebrate both the history and the future of the affordable housing movement in the community that hosted the 2011 Millard Fuller Legacy Build.

“I see it as a turning point to grow it even further,” said Derek Melancon, who was named the covenant partner’s executive director in December, replacing the retiring Charlie Park, who had led Webster Parish since its days as a Habitat affiliate. “That was my goal when I came in here. Charlie’s moved it a long way and brought it to a very good point, but I’d love to see it grow beyond that. They’ve been doing about three new houses a year, and I’d like to see four this year, five the following and just a continuing growth.”

“The dedication of their 50th house is a fitting tribute to Charlie’s outstanding leadership over the years and an appropriate welcome to Derek Melancon, who has recently taken the reins” he added. “God bless Charlie as he steps into retirement and Derek as he steps into those big shoes. May Webster Parish continue to inspire us all with their good works.”

Melancon said that combating the misconception that The Fuller Center gives houses away is part of his message to the community as he stresses that homeowner partners not only put in 500 hours of sweat equity but also down payments and monthly zero-percent-interest mortgage payments that go into the Fund for Humanity to help future homeowners.

“These people are working their tails off,” he said. “Granted, they don’t have an 850 credit score, but their working their tails off. They will be taking care of these homes. I was down in Legacy Acres (where eight new homes were built during the 2011 Legacy Build) the last two mornings, and those folks are keeping that neighborhood up.” 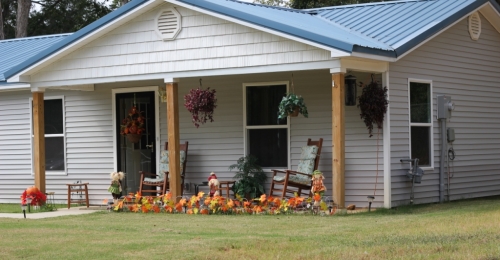 He also said that The Fuller Center has traditionally had strong support from the southern part of the parish, and he wants to build that same kind of support on the north side. That, he said, simply comes from getting the message out there in any way possible, which is one reason why he has led the charge to update the covenant partner’s website and Facebook page.

“It’s so north-south oriented, and the north is so different than the south,” he said. “One of the things I want to do is go out and promote this as not only a ministry but something that drives economic growth in the community because it brings in nice houses to replace old, dilapidated stuff; it brings taxes into the community; it creates better citizens; and the children benefit from it because they have a nice house to go home to and study.

“I see it as something that’s very positive wherever it’s at, whether it’s Webster Parish or Shreveport or whatever because it helps create better living conditions and helps the community,” he added. “We’ve just got to get the word out.”

A major opportunity to help spread accurate information about The Fuller Center’s common-sense approach to empowering people and communities through affordable housing will be March 21 when the covenant partner holds a silent auction fundraising event at which the Monday Nite Choir Boys will perform. Among the items up for bid that night will be a guitar autographed by country music star Trace Adkins, a Webster Parish native. For more information about the event, click here.

Click here to donate to The Fuller Center of Webster Parish.