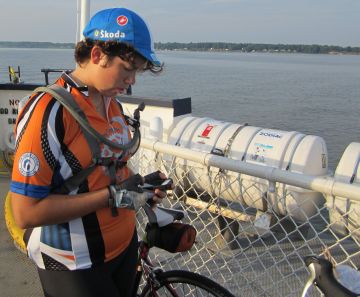 It’s always curious to me how my plans never match up with what actually happens. This week was no exception.

The FCBA’s East Coast ride brought them threw my neck of the woods, near the Northern Neck of Virginia. Originally I had made plans to just stop in and have dinner with the crew and then meet back up with them in a month and bike down the West Coast. But as fate would have it, my job situation could change in the next month, making the West Coast ride not as plausible as I would have hoped.

Another factor I had not planned for was how addicting FCBA is and after only 10 minutes of socializing with the group, it’s almost impossible to willingly pull yourself away from their world.

And so, without even sleeping on it, I packed a bag, greased my bike and joined on the southerly adventure.

Virginia is my stomping grounds and so it wasn’t until we started today’s journey that I really felt that since of awe and excitement of the “road trip.”

Today’s journey took us 87 miles from Aoshokie, N.C. to Kinston, N.C. Now that I’ve been cycling a couple of days with the group, the extensive exertion of pedaling finally caught up with my body. Both my butt and knees were screaming in agony as I cranked out the first 25 miles, and I momentarily questioned why I was working my body so hard.

However, as all these negative thoughts crossed my mind, the morning’s devotional message suddenly rang loud and clear. God will always provide and will never give his children circumstances that they cannot overcome. So with that in mind, I was able to successfully finish today’s ride.

It was mostly overcast today, which was nice relieve from the intense sun, but it rained a good 75% of the day. While it was nice to have a cooler temperature, I was not too fond of being drenched head to toe, while pedaling with whatever strength was left in my legs.  Instead of grumbling and getting frustrated though, I found myself laughing and smiling. How lucky am I that I have two legs that can work, and the time to be able to be on such an adventure?

While it definitely was a strenuous and long day, it was probably one of the better days I’ve had cycling. We arrived at our destination at Perry’s Fun Farm around mid-afternoon and were pleased to find a beautiful house, fully furnished with beds and couches. Our hosts were extremely welcoming and were gracious enough to provide us with a delicious and satisfying dinner. I am already starting to feel refreshed and look forward to our build project, here in Kinston, tomorrow.