Prince William County resident Joshua Himan said he joined the U.S. Marine Corps a few years ago because he wanted to give back and contribute to a war that shaped his generation.

But now, it’s the community where Himan grew up that’s giving back to him after the 26-year-old was wounded while serving in Afghanistan. 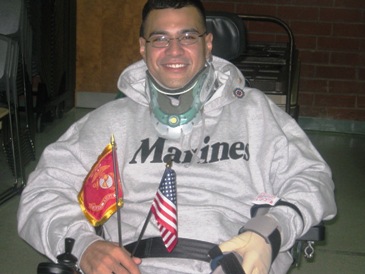 Officials from the Northern Virginia Fuller Center for Housing, Azalea Charities, the Quality of Life Foundation and Caulkins Construction are scheduled to break ground Thursday on a renovation project that will help make getting around his Woodbridge home easier when Himan returns. He was paralyzed from the chest down when the vehicle he was riding in hit a roadside bomb in September 2009.

"It’s a tremendous honor to have so many people and organizations help not only myself, but my family," Himan said. "I really can’t express in words how grateful I am . . . and I want to thank everyone for their help."

The almost $40,000 project will include an updated kitchen and bathroom, wider hallways and doors, and a master bedroom suite for Himan on the first floor of his family’s two-story home. Jacob Koch, president of the Fuller Center, said several local businesses have contributed time and funding to make the project possible along with an anonymous donor who promised to match donations received before the end of last month, up to $15,000.

"This is the first project we’ve done for a wounded veteran, and it’s an honor," Koch said. "I’m doing everything I can to ensure we can bring this gentleman home."

A graduate of C.D. Hylton High School, Himan attended Radford University, where he earned a degree in finance. He then joined the Marines in January 2008.

"I have always admired Marines, and I wanted to test myself to the fullest limit of mental and physical strength," Himan said.

He spent about seven months in Helmand province in Afghanistan, before the Humvee he was riding in drove over a pressure plate roadside bomb. Himan was ejected from the vehicle, broke his neck and experienced other back fractures, which paralyzed him instantly, he said.

"When I was on the ground, I thought I was fine," Himan said. There was "a little blood, but when I was unable to get up, I knew something was wrong."

Since the accident, Himan has been to several medical facilities and is finishing his five-day-a-week therapy regimen at Walter Reed Army Medical Center. When the work is completed next month, it will be the first time he has been home in years.

Himan said it has been a challenge to adjust to his injury, but his family has been very supportive. His mom in particular, he said, has been his "rock," sitting by his bedside almost 24 hours a day.