MACON, Ga. – While working toward the rank of Eagle Scout, high school student Burgess Brown organized a fund-raiser to provide a new home for a family of Villa Fuller in San Luis Talpa, El Salvador. Saturday, Nov. 14, Brown led 134 high school students and families from the Macon community in what he called a "Walk for Walls" that aimed to raise $5,000 for a home in Villa Fuller.

After participating in a Fuller Center Global Builders trip to El Salvador in June, the 17-year-old found himself with a new passion to serve others and particularly with a heart for helping the people of El Salvador. Brown took part in a one-week trip with 26 other volunteers, led by Dianne Fuller and sponsored by Highland Hills Baptist Church in Macon, Ga (read more about that trip here). The group spent the week working side by side with the homeowners and families of Villa Fuller to build a poured concrete home, which will provide a local family electricity, plumbing, and a building ready to withstand the rains and hurricanes common in coastal El Salvador.

Building a house in El Salvador was some of the most difficult, strenuous, and tiring work I have ever done," said Brown. "But, when I saw the tin shacks and plastic structures where the families had lived before Villa Fuller was built, my heart broke. I knew that the work we were doing was worth every drop of sweat and every sore muscle that I experienced during the week." 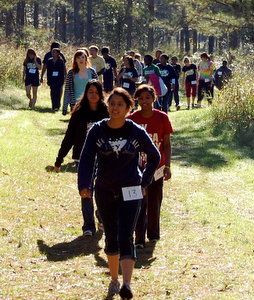 Brown’s connection with the children and families in Villa Fuller continued after his return to Macon. He knew that he might not be able to take another trip to El Salvador, but with the help of his friends in Macon, he could continue to offer hope and help to his new friends in San Luis Talpa. Prior to the walk, Brown met with the Key Club at his high school, spoke at the local Kiwanis Club, and worked with his church youth group to spread the word about the Walk for Walls. Brown and several of the Key Club officers created fliers, brochures and a promotional DVD to help build enthusiasm for the event.

The Walk for Walls was held on a 1.5 mile course at the Georgia Industrial Children’s Home in Macon. Participants were encouraged to solicit pledges for the number of miles that they planned to walk, or pay a $10 registration fee.

“The event was a great success. We had absolutely perfect weather and a great turn out,” Brown said. “We had participants of all ages, from three years old to senior citizens. The Key Club of Central High School was incredibly supportive and had tons of its members out walking. Three students even ran a marathon to support the cause." 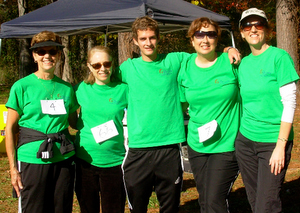 The event kicked off at 9 a.m. and didn’t close down until 5 p.m. The 134 participants walked a total of 863 miles throughout the day. Although the total amount of money raised will not be final until the pledges are all collected, Brown said that the goal of $5,000 is certainly reachable.

"I’m just glad that so many people in Macon are now aware of the situation in El Salvador and the work of The Fuller Center," said Brown. "Especially with the recent storm damage and devastation in El Salvador, the need for decent and safe housing is greater than ever."

All monies raised from the Walk for Walls event will be donated to The Fuller Center for Housing and designated for the construction of a home in Villa Fuller in San Luis Talpa, El Salvador.