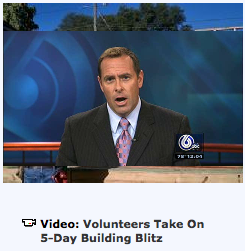 Hundreds of volunteers converged on a south side Indianapolis neighborhood Monday as part of a five-day building blitz aimed at transforming communities across the globe.

Habitat for Humanity and the Fuller Center for Housing are working together on The Millard Fuller Legacy Build, which has a worldwide goal to build 115 affordable housing options for families in the next five days, 6News’ Julie Pursley reported.

"This Labor Day, we say we’re doing a labor of love with our hands," said Linda Fuller, the wife of Millard Fuller, who created both organizations. "The need is huge. This is just making a small little dent in poverty housing."

Linda Fuller and Indianapolis organizers kicked off the local build in the 1100 block of S. Saint Paul St. in the Fountain Square neighborhood.

"We asked the city if there was an area they would like for us to concentrate on or take a look at, and Saint Paul Street was a center for illicit activities, for drugs and for gang activities,” said build Chairman Stu Peterson.

Nearly 300 people, including several church groups and volunteers from across the country, were hard at work at the site Monday.

"It’s a great project and a great way to give back to the community, as far as I’m concerned, even though it’s not my own community," said Chuck Lee, a volunteer from Virginia.

Crystal Young, a mother of three who moved to Indianapolis from New Orleans after Hurricane Katrina, will become a first-time homeowner when work is complete.

"It’s a blessing to see so many people from so far away giving their time, their money, their energy, their effort, their love and their sweat,” she said.

Young and the other families will be able to move into their new homes in a few weeks. Continue reading>>