Tim DuBois of Minnesota is a familiar sight around Fuller Center for Housing work sites — and not just because of his favorite polka-dotted hat or trademark mustache. He’s familiar because it seems he’s everywhere you go. 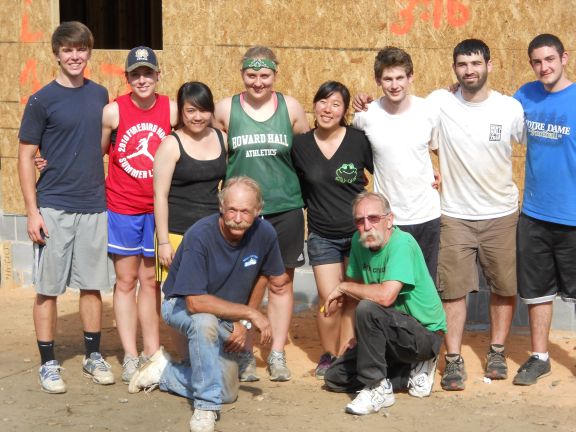 Having volunteered with The Fuller Center since 2006, he’s been to Legacy and blitz builds, foreign countries like El Salvador and even North Korea, and he’s helped out at many a single build site, including last week in Lumpkin, Ga., where he and frequent build partner Charlie Thell worked with an eight-person team from the University of Notre Dame on the first new home build by the Southwest Quarter Fuller Center.

Tim is a master at turning inexperienced construction groups into effective teams, and he and Charlie did just that with the Notre Dame crew, even though most of the students had never met before the trip. Tim said the team raised walls and a roof, cut, hammered and shingled. They also learned about the importance of plumb, level and square; along with a thing or two about patience and adaptability. While safety was stressed, so was having fun. It didn’t hurt that the community of Lumpkin welcomed the students with warmth — not to mention catfish, collards and fried chicken.

We caught up with Tim in Lumpkin last week just after he and Charlie returned from working in Nicaragua and just before he took off for McDonough, Ga., where he met with the Henry County Fuller Center that will host the U.S. portion of the 2012 Millard Fuller Legacy Build in September.

How did you get started volunteering with The Fuller Center?

I just was looking for a way to plug in and help rehab after Hurricane Katrina. By chance, I got hooked up with The Fuller Center.

And why have you stuck with us?

What did you do before retiring?

I worked for a natural gas distribution company. I was primarily a gas-fitter and pipe welder, and the last few years I was a trainer for them.

What have some of your memorable trips and experiences been with The Fuller Center?

The first El Salvador trip was awesome, in 2007, the year before the blitz build down there. It was a very small build, and it was in a different location than the current one. But that was just memorable because of the interaction with the local people. Charlie and I worked with local masons more than we did with anybody else. It was real meaningful because we were immersed in their community for a while.

You’ll be involved with preparation for the U.S. portion of the 2012 Legacy Build in Henry County. What are you doing to help them prepare?

Right now, I’ve made some contacts with the people in Henry County, and I’ve told them that I wanted to help bridge the difference between being a knowledgeable contractor or knowledgeable carpenter — the difference between that and an operation of a blitz build. Sometimes the process of a blitz build has to be choreographed differently than a regular construction build. And I’m hoping to bring the two together so that we can take all the skill that we have, as well as the unskilled, and plug them in in a way that most of them are not aware that things have to be done.

You’re working with college kids today and you worked with some newbies at the 2011 Legacy Build in Minden, La. It seems that you’re counted upon as someone who can lead less experienced workers. Do you have that skill?

Well, I’ve been accused of having that skill. I enjoy working with young people. I enjoy teaching them as we move along through the job process. It’s a lot different than telling someone where to put a nail and explaining to someone why you put a nail there. I usually am not the fastest person around, but the people that I’ve worked with have gained some knowledge throughout the week. And the next time they show up on a build, they’ll have a resource pool to start with. Usually, I’m just very aware of the volunteers’ curiosity, their abilities and where to plug them in. And a great deal of it is having fun while we work, but also doing a top-notch job.

Do spring-breakers seem to have more fun than other volunteers?

I had some spring-breakers last year, too, and I enjoyed the heck out of them. I enjoy working with the younger folks. Sometimes they come and don’t know a hammer from a pair of scissors, and some of them have a little bit of knowledge. Some of the kids that I worked with last year, I’m confident that I can put them on a house and have them side it with minimal supervision, and they’d do an excellent job.

See more photos of the Notre Dame crew in action!