After a year of hard work on a Fuller Center house, Carroll County High School students will soon roll their project out 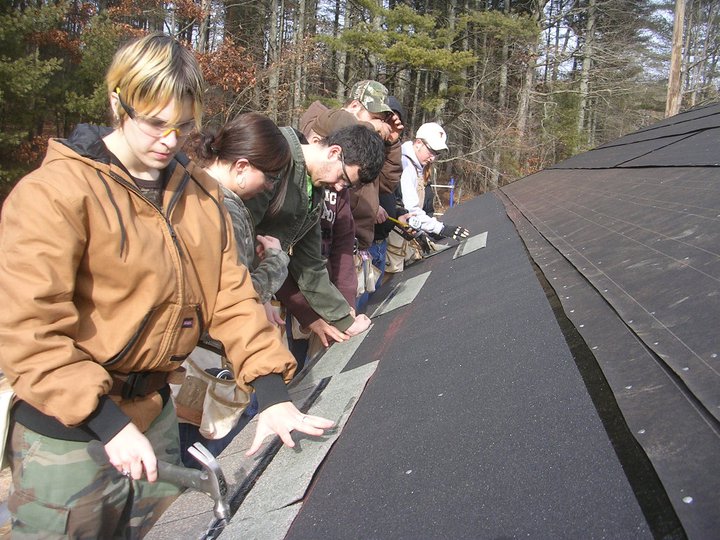 on Main Street for the entire town to see.

But the display is not just a matter of pride – the modular house was built in two halves at a work site just outside of the high school. Once the halves successfully arrive at their permanent location, they’ll be put together to make a home.

“We would not have been able to accomplish what we’ve been able to accomplish if we had tried to do it on an actual building site because of the time involved with transporting students to and from the site,” explained Oliver McBride, director of The Fuller Center-Carroll County Greater Area. “This way, they just kind of walked out the shop doors and up behind the baseball field there was the house that they were working on.”

The unusual work site also served as a way to get the word out about the project.

“We put up a sign on the side of the road that told everybody what was going on,” McBride said.

The high school students, mainly those in the building trades class, did the bulk of the work on the project.

In 2010, the building trades class was named an exemplary program in the state of Virginia by the Virginia Department of Education, partially because of this work.

But students from a range of disciplines have also partaken in the project, though not necessarily providing manual labor.

“These students, it’s meant a whole lot to them,” he added. “One, they’ve learned a lot by being able to build a house. And two, they’ve learned what it means to be able to serve others by being able to participate in the building of the house. There have been a lot of practical lessons about construction but there have been a lot of life lessons about service to others that they have learned. “

Instructors: ‘Something we can’t replicate in a lab’

Rusty Warren and Vance Leggetts, building trades program instructors who are also members of the local Fuller Center board, initially established the partnership with the local high school.

“It proved to be a tremendous learning experience for the students because they were able to do hands-on building of a house. That’s something we can’t replicate in a lab,” Warren said. “While student labor is slower than a professional coming in, as far as being able to construct the house, they did a good quality job, and I was really impressed with the amount of work we were able to get done in that abbreviated time.”

Not to mention that the students will see their work make a tangible difference in a family’s life.

“While schools do a lot with community service, it’s often through a faceless, nameless, impersonal organization,” Warren said. “That’s one of the great things about this – the students will be able to say, hey I helped so-and-so. I did this. They can say that with pride and that’s something that they can say every time they ride by the house.”

Once the house halves are put together, members of the community will have more of an opportunity to get involved as well. 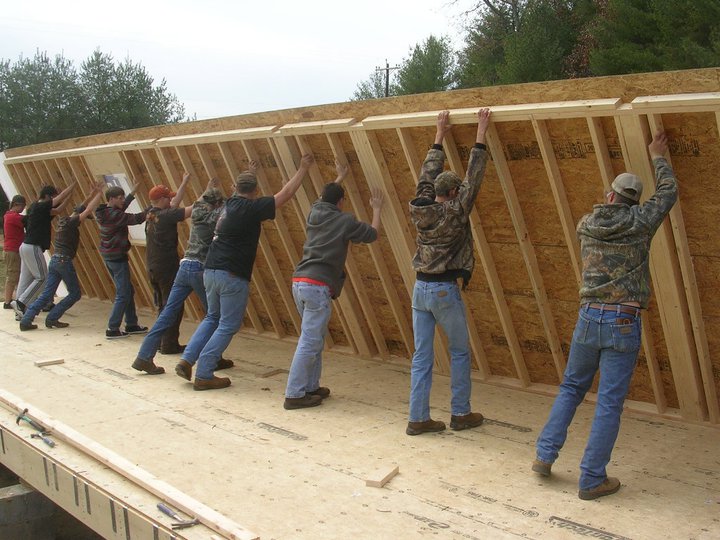 “We’ve had tremendous support from the community– it’s really been a group effort,” Warren said. “Once the house is moved, we’ll have work days for the community so they can come in and get involved, to feel like they’re more a part of this project, and it’s not just a high school project. Then the community will start getting a little more ownership.”

“Our students were really excited about doing that,” McBride said. “That was kind of the initial trying to help build public awareness among the students, and then among the community, of what the Fuller Center was.”

And it’s likely that after rolling the house on wheels through Main Street later this month or early December, even more locals will know about the covenant partner.

Just who will live in the house has yet to be determined, however.

“That’s been the slow part of this … we’ve had some other applicants who didn’t quite pan out,” McBride said.

But once that third and most important piece is put into place, they’ll have reason to celebrate.

“We’re certainly excited,” McBride said. “This is something we’ve been working on for a good while and we’re excited to kind of see it beginning to take its final shape.”