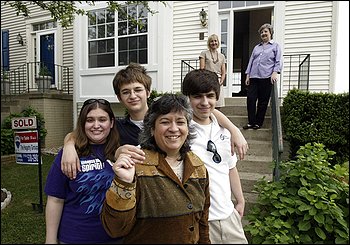 The townhouse at 17326 Wexford Loop in Dumfries didn’t look like a home earlier this year but rather an eyesore to those passing by.

With mildew stains, rotting wood around the windows, an unstable deck and peeling paint, the foreclosed property needed a makeover — and that’s what it got last month as volunteers and nonprofit groups joined forces to turn the desolate house into a family home.

"When we first drove up to the home, it stood out as an eyesore on the block," Prince William County resident and volunteer Scott Sells said. "But we put a lot of work into it to bring it back to its original form. It will help bring property values back up and will be a home for someone. . . . Everything worked out well."

Prince William, which was deemed the center of Virginia’s foreclosure crisis with more than 6,500 foreclosures in 2008, also received about $4 million from the roughly $39 million pot of funding the state had to give to nonprofit groups and localities. The funding is being used for various housing initiatives.

The consortium includes the Dale City Volunteer Fire Department, Northern Virginia Fuller Center for Housing, Northern Virginia Family Services and Catholics for Housing, the group that spearheaded the grant process. Consortium officials said the grant should help rehabilitate 10 more foreclosed properties that will be sold to people in Prince William, Manassas and Manassas Park who might not otherwise be able to afford a house.

Read the story "Virginia Fuller Center to restore house" for more on the project.

Get involved with the Northern Virginia Fuller Center for Housing…

Or find a Fuller Center near you!