Between the time Fuller Center for Housing volunteers celebrated the kickoff of the 2015 Millard Fuller Legacy Build and the moment the first walls were raised Monday morning in the Allendale neighborhood of Shreveport, homeowner partner Robert McDuffy had to go to work.

A Vietnam veteran who works for a local janitorial service, McDuffy worked a night shift at one site and an early morning shift at another. But, like all the homeowner partners at the 2015 Legacy Build, he was on the job site Monday morning ready to work alongside the volunteers who have come from across the country to help build his home. 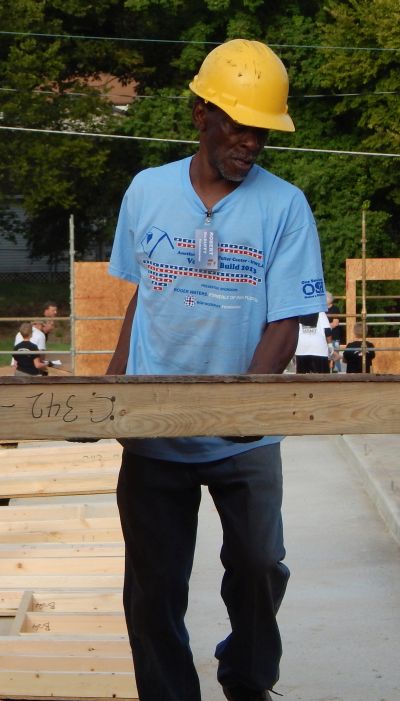 “It’s worth it — it’s for me,” said McDuffy, who has been living in a cramped three-room efficiency and has been patiently waiting for an opportunity to become a Fuller Center homeowner since 2012. “It’s really important. You’ve gotta work for it, and I’m gonna work for it.”

McDuffy said he learned the value of hard work early in life and in the U.S. Army, in which he served as a radio operator during the Vietnam War from 1969-70. He insists that veterans like himself prefer charities like The Fuller Center that empower people to help themselves.

“Veterans don’t want a handout,” McDuffy said. “They want a hand-up. We’ll work as hard as anybody in this country.”

Fuller Center partner families contribute sweat equity in the building of their homes and pay back the costs of materials on terms they can afford with no interest charged to help others become homeowners. That model is not just for veterans like McDuffy but for everyone who partners with The Fuller Center.

“It’s unfair to the many volunteers who give their time, their money, their resources and their energy to build homes if the homeowners are not involved in the process,” said Lee Jeter, who is executive director of The Fuller Center for Housing of Northwest Louisiana and a Marine Corps veteran himself. “That is the heart and soul of this ministry — making sure the homeowners are engaged in every step of the process. It’s very important. The volunteers expect it, and we demand it.”

Of course, Jeter has found that he has not had to voice that demand very much as homeowners enthusiastically embrace the opportunity — something they’ve done 44 times in the Allendale community alone, not counting the four new homes going up this week.

“When you tell somebody that they’re being blessed with the opportunity to own a home, there’s a period of disbelief — ‘Yeah, right, they’re gonna build me a home,’” Jeter said. “But as they go through that process, that belief becomes a reality and their faith is played out through that process. In order for them to have that faith, they’ve got to walk that journey. They’ve got to go through the whole process. Once they see it happening, they realize that God is in the midst of everything that we do.

“We have to make sure they understand they’ve been given a gift,” he added. “Still, it is more blessed to give than to receive, and they’ve got to give back. They’ve got to pay it forward so that others can become homeowners.”

Click here for photos from Monday’s work at the 2015 Millard Fuller Legacy Build.