One of my favorite parts about the Bicycle Adventure is the ever changing scenery. Each day has brought more of the variety and beauty of God’s creation into view and today was no different. As we gathered for our morning route meeting shortly after 5, the sunrise over the hills to the east was beautiful. We don’t usually start off quite that early, but with over 94 miles on the agenda, it was a wise decision to get an early jump on the heat.

Today we left behind the forests of Idaho and rode through mile after mile of rolling hills covered with wheat. Thanks to the farmers who stopped to talk with Tom and Lois at our last rest stop of the day, we learned the other crops we saw along the way were garbanzo beans and split peas. It was all beautiful and I enjoyed seeing some combines in action. Harvest is a fun time of year.

One question we are often asked is whether or not we all stick together when we are riding. We do not. I can’t tell you what the ride was like from the front, but here are a few things that happened towards the back. Today I was riding sweep with Dani so we were bringing up the rear. 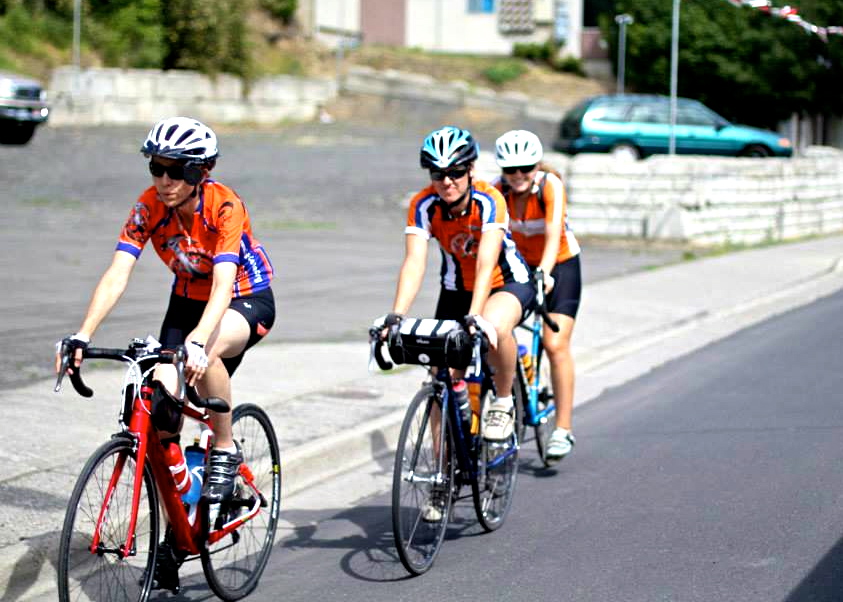 – Dani had a hard time getting a picture of me without my camera in my hand and there were numerous times, especially early in the ride, when those in front of me all seemed to have their phone/camera in their hand as they twisted around to try to get a good picture of the sunrise.
– There was a party on the road when Melissa reached the 10,000 mile on her bike.
– One of the riders (who will remain anonymous) ended up on her back in a 5 to 6 foot deep ditch holding up a bike after stepping out of the way of a pickup at one of our rest stops. It seemed to happen in slow motion and once we heard her laughing and saying she was OK, we all had a good laugh before a couple of the guys lifted the bike off of her and helped her out of the ditch.
– It requires at least 4 people dressed in orange jerseys to fix a flat tire (or at least provide moral support).
– The descent into Lewiston on the Old Spiral Highway was approached with different levels of excitement. Dani and I stayed at the scenic overlook for several minutes after the others set out. That allowed us to go full bore and only brake to go around the hairpin turns. By the time we reached the last few turns, I’d figured out that the 20 mph sign meant I could get around it going at least 30 mph. As we descended the temperature rose at least 10˚ and we were thankful our ride was almost over. A bank clock in town announced the temperature was 98˚.
– There is much encouragement given to all and there were three willing volunteers to ride an extra 3.1 miles with Molly so she could do her first century.

Another favorite part of this adventure is meeting our hosts each evening. For the next three days we are calling the Congregational Presbyterian Church our home and I must close so I can visit with those who are providing food for us this evening.