The Fuller Center for Housing has had many student groups work with its covenant partners through the years, especially during spring and summer breaks. Many of these student groups are affiliated with clubs or organizations on their respective campuses. But with students from the University of Idaho, the entire campus is service-minded. 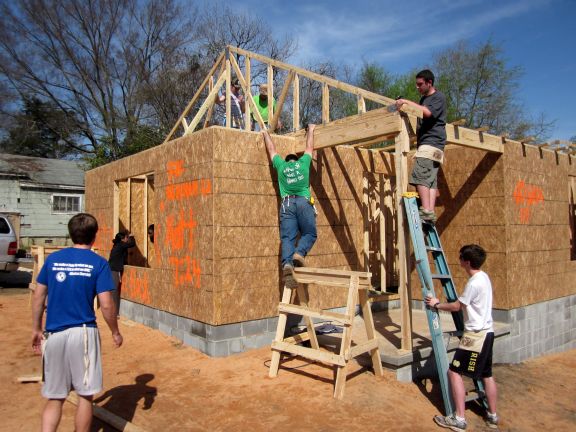 Three groups from the University of Idaho are working with Fuller Center covenant partners this week — with Southwest Quarter in Lumpkin, Ga.; Webster Parish in Minden, La.; and Ginger Ford North Shore near Hammond, La. They were sent by the Associated Students of the University of Idaho’s Center for Volunteerism and Social Action.

“The University of Idaho has been doing this since 2005 with Hurricane Katrina,” said Yvette Yzaguirre, a triple major in business marketing, management and public relations and the team leader of the group working on the very first home build by the Southwest Quarter Fuller Center. “They sent some students down there, and it started with a couple of groups. … The center basically takes applications from students and faculty who would like to spend their spring break doing service. So they take these applications, review them and decide where the students will go.”

The years of encouraging students to volunteer — with some majors required to perform service hours — have fostered an atmosphere of service that has become contagious. Students are serving because they want to.

“We promote service learning so that students will gain practical work experience, but many contact us just because they want to serve,” said Center for Volunteerism and Social Action administrative assistant Meladi Mottern, a 2009 graduate of the university contacted by phone Wednesday. 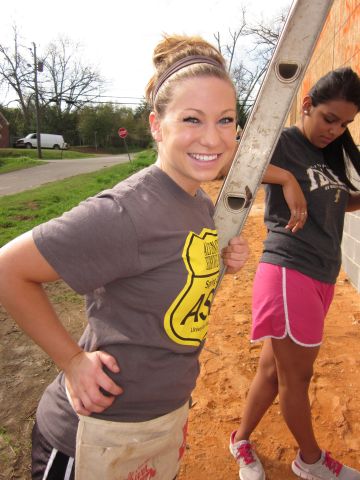 “We really are a service-based university,” Yzaguirre said. “I know some of the majors that are at the university require some service hours. But this isn’t required work that goes toward any major. This is just for everyone who wanted to volunteer.”

Not only are the students willing to give of their time, but of their money, as well.

“It’s all on a volunteer basis,” said Blake Wetzel, who majors in human resources with an emphasis on marketing. “The students pay for their own plane tickets, essentially. And the volunteer center coordinates it all.”

And Wetzel said it’s been worth every moment and penny to contribute to the Southwest Quarter Fuller Center’s first build, a home that will go to single mother Alethia Starling and her three children.

"People that I’ve talked to that have gone on service trips before have really enjoyed it and said that it’s very rewarding. So I wanted to serve a community and donate my spring break.”

The spirit of service is so contagious, in fact, that it has spread to the faculty. The students in Lumpkin, Ga., are being joined on their trip by Denise Bennett, a senior instructor in video, television and film production with the university’s School of Journalism and Mass Media.

“I always recommend to students that they go on an alternative service breaks, study abroad or just get a new experience. So I decided that if I’m going to talk the talk, I should walk the walk and do it myself,” said Bennett, an accomplished filmmaker whose short “Pups” about high school football players won the Best Overall Short Documentary Award at the 2010 All Sports Los Angeles Film Festival “I’ve never done a service trip. I’ve done community service work, and we use service learning in a couple of classes that I teach, but I’ve never been on a trip like this.

“One of the initiatives at the University of Idaho is to promote what they call service learning, which is just a philosophy of teaching that gives students hands-on experience to learn about social issues and civic issues. So, it’s a big push.”

And Bennett is glad the “big push” has shoved her into a warmer climate for a little while.

“I am not missing our winter,” she said. “It’s snowing right now where we live. It’s nice! I don’t know if I’d enjoy it in the summertime when it’s 90 and humid, but it’s nice for spring break.”

Read and watch a video about other spring-breakers working with The Fuller Center.

Learn how to get involved with our thriving Student Builders program.

See more photos of the University of Idaho students working in Lumpkin, Ga.