Five of the 10 new houses that will be built in La Florida, Peru, during the international portion of the 2012 Millard Fuller Legacy Build already have been fully funded by generous donors. A sixth will funded by a collective effort of The Fuller Center for Housing’s U.S. covenant partners.

The “Build Lizzy a House” idea popped up during The Fuller Center’s monthly leadership call early this month when it was reported that house sponsors were still being sought for the Peru hub of The Legacy Build. Director of U.S. Field Operations Kirk Lyman-Barner suggested that U.S. covenant partners should collectively sponsor one.

“A small group of leadership shared with (Director of Development) Dianne Fuller that they liked the idea, and I started making phone calls around the country,” Lyman-Barner said. “Every single team I talked with agreed to support the effort. When we were assigned a family, I saw that there was a three-year-old girl named Lizzy who needed a house to grow up in. So I said, ‘We will build Lizzy and her family a house!’” 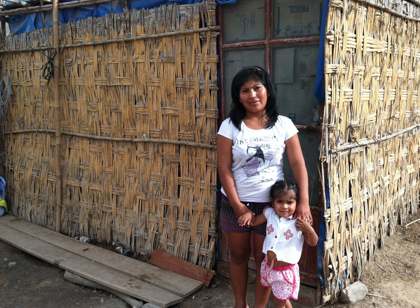 One of the Peru houses can be sponsored for just $5,500. (Click here to see families available for sponsorship.) Lyman-Barner calculated that if each covenant partner gave just $100, they could completely fund the house. They’ve already raised nearly half that amount.

“Dianne wrote some emails, and I picked up the phone, and we talked to about a third of our leaders,” he said of gauging interest. “We are 20 for 20 so far! Everyone wants in on this joy. I predict we will have 100 percent participation. Even the most financially challenged groups can find 10 people to give 10 bucks to dramatically improve the life of Lizzy.”

And her parents. Currently, Emanuel Yaro Yactayo, 25, and Milagros Arias Lopez, 24, live in a small, one-room shack with their daughter. They are migrant workers whose home is built of sticks, plastic and manure.

While U.S. covenant partners focus on domestic house building and repairs, they do have an impact elsewhere. So helping international partners is nothing new.

“The Fuller Center for Housing is an international ministry with a mission to eliminate poverty around the world,” Lyman-Barner said. “Our U.S. teams focus on need in their own service area, but they also tithe money to support international programs. We encourage them to organize trips through our Global Builders program and visit the countries they are supporting and the lives they are touching. Even the economically poorest parts of North America are often far better than some of the slums in Central and South America, Africa and Asia where we are building.”

And some from U.S. covenant partners will get a first-hand look at the work in Peru the week of Sept. 1-8.

“Some of our leaders will be going down to Peru,” Lyman-Barner said. “They are going to get their picture with Lizzy and come back and tell us about the power of what can happen for one of God’s children in need when many small donations and a few volunteers are coordinated.”

Register now for the 2012 Millard Fuller Legacy Build in Peru or Georgia!