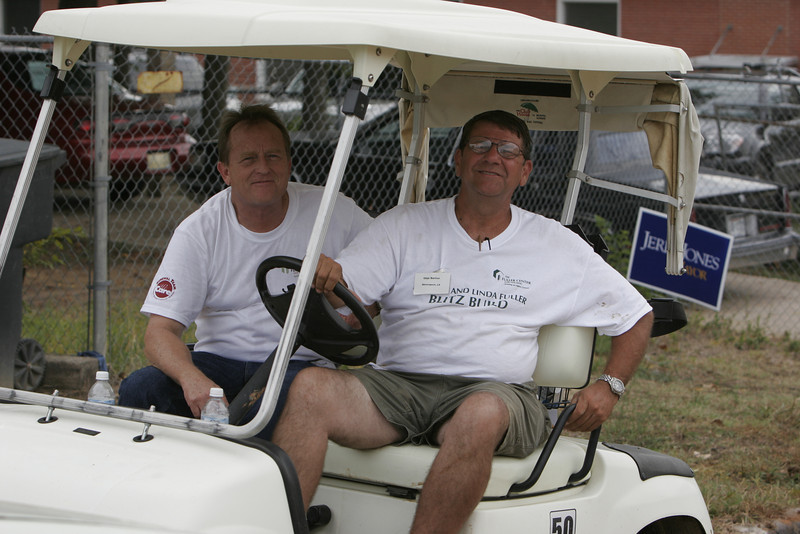 I started this blog to report on my travels, and despite my poor discipline in updating it I do feel the urge every time I hit the road.  I got back early this morning from a week in Congo, so my juices are flowing.  The trip got off to a sad start, though, and that’s what’s on my mind now.  When we arrived in Kinshasa on Monday evening I called home and got the news that our friend and partner Glen Barton had died.  I’ll share some of our Congo experiences over the next few days (one of our group, Craig Martindale, rightly noted that there was no way a script could have been written for what unfolded there!).  Today, though, my thoughts are on Glen.

I first met him in late 2005.  Mack McCarter of Community Renewal had met with Millard and me to see if we could get some houses built for the Katrina refugees who had flooded Shreveport after the storm.  We all agreed that it would be a good thing to do, but we didn’t have a covenant partner there and knew we’d have to take the lead in the work.

About this same time Millard and Glen had been in touch and Glen indicated a willingness to get involved.  Millard asked him to drive over to Shreveport to meet with me (a short 5 hour trip, he said—turns out its more like 14).

We met at a little coffee house on the King’s Highway and got to know one another.  It turned out that we had a fair amount in common.  We had both worked for Habitat and both awoke one day to find that our positions had disappeared in a restructuring.  We were the same age—a pair of old guys not ready for retirement and looking for a new life assignment, and we were both committed to Millard Fuller’s vision of a world without poverty housing.

We came to terms that day and Glen agreed to come over to Shreveport to help get the project underway.  He committed to six months and ended up working there over two years.  In that time he oversaw the construction of over thirty houses and the remarkable transformation of an entire neighborhood.  He gained the respect of donors, volunteers, homeowners and community leaders, and he helped put the Fuller Center for Housing on the map.

In the meantime The Fuller Center was on the move, with new covenant partnerships forming across the country.  When the time came to transfer the Allendale project to the newly formed Shreveport CP Glen signed on Director of US Field Operations.  This let him move back home and to have a full-time associate—his wife Brenda.  The two of them worked tirelessly helping new covenant partners get organized, helping existing CPs stay energized, and providing invaluable support for our accelerated building projects.

When I got back from Congo and was able to check my voicemail I had a saved message, “Hey David, it’s Glen.”  I can’t say how many times I’ve heard that phrase over the past two and half years.  Glen and I spoke nearly every day, working through problems, making plans, finding ways to carry this great ministry forward.  It’s hard to believe that I’ll never hear those words again.

Glen Barton was a good man.  He worked tirelessly on behalf of the covenant partners and earned their respect.  He cared deeply about them, and knew them well.  Glen was a true partner and a friend.  During his illnesses over the past year I’d find myself asking, ‘What would we do without Glen?”  Now we have to answer that question, and we will.  This ministry is blessed and we will find our way through.  But I will surely miss picking up the phone and hearing, ‘Hey David, it’s Glen.’