We’re hard at work preparing the lot for our first new Fuller Center house in Americus. Architect Meda Krenson and Millard’s former law partner, Tom McFarland recently emailed some great news: the lot is big enough for a duplex! So the Americus-Sumter County Fuller Center for Housing is taking applications for a second family. That good news means we need to find a second church to partner with our first church sponsorship (coincidently named Americus First Presbyterian). We are confident that the Theology of the Hammer can bring folks together around activities individual congregations might struggle to do on their own. We are filled with hope anticipating what God has in store for this little piece of holy ground. 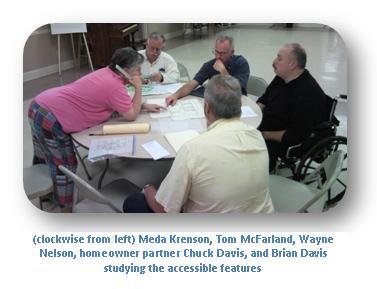 The first order of business to prepare the Elizabeth Street lot was to cut down some bamboo and demolish a dilapidated shed.

Last month, the First Presbyterian youth group gathered the trash from the site; junk, toys, dresses and even a bowling ball, and moved it to the curb. They used sledge hammers and crow bars to knock the shed down. Hearing the roof smash to the ground, one youth shouted, “Now, that was extremely satisfying!” After the work was done, the youths visited with neighbors and enjoyed some chili dogs.

Unfortunately, a call from a City official came telling us that the refuse company couldn’t pick up the trash for free. So I called our friends at Koinonia Farm. 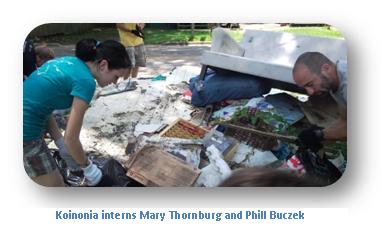 Right away, Craig Martindale brought out a dump truck for us to fill during the next youth service night. When he saw the demolished shed, he said that the Farm could use the tin and the 2”x 4” lumber for chicken barns and such, and he offered to haul the garbage for free if we loaded it up, in exchange for the materials. But it rained hard two weeks in a row and the service evening never happened.

Meanwhile, to paraphrase an old Arlo Guthrie song, some neighbors took a look at our pile of garbage and decided that one big pile was better than two little ones. And rather than bring our garbage to their home, they decided to bring their garbage to our lot. They brought all kinds of stuff and furniture too! Needless to say we had created an “attractive nuisance” and we needed to move our trash pile quickly.

Koinonia came to the rescue again. The first day of June was also the first day on the job for several industrious Koinonia interns. Craig Martindale and Nashua Chantal brought the crew and a tractor into town. We got the truck loaded and separated the tin from the reusable lumber, moved all the trash (including the gifts from our neighbors) and all was going very well until a cut bamboo stalk punctured a hole in the tractor wheel. Craig was remarkably restrained and didn’t lose his cool in front of the new interns. The job site is once again cleaned up and ready for the next phase – construction! 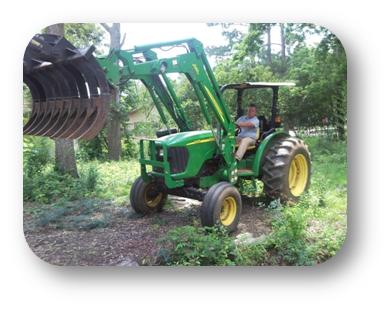 All this work preparing the site got me thinking about trash. I wonder what it means for Christians who want to take seriously John 3:16 which reads, “For God loved the world so much that he gave his only begotten son.” Our trash is a problem and an insult to the integrity of this revelation.

Recently, Tripp Pomeroy, co-owner of Café Campesino, an organic fair trade coffee company here in Americus, was asked about some of the biggest challenges of maintaining high standards of social and environmental responsibility. Tripp thoughtfully replied:

We believe that being green starts with our own personal behavior. So I would say changing old habits and developing new, greener habits are our main challenges. Millard Fuller, the founder of Habitat for Humanity International and The Fuller Center for Housing was known for picking up trash whenever he was out walking around town. I consider this to be a fundamental form of “being green.” Other forms include recycling, not using bottled water, turning off the lights and air conditioning, etc. When all of us at Café Campesino are doing these things routinely, out of habit, I will consider ourselves as having overcome one of the biggest challenges facing the green movement as a whole.

Tripp recently saw his daughter Sol picking up some trash as they were walking together through town. Pleasantly surprised, he asked his daughter, “Where did you learn to do that?” She replied, “I’ve seen you do it.”

In Millard’s book Building Materials for Life Volume 1 he described his ritual of picking up trash on his daily walk to and from work. Over time people began to notice, and as they expressed appreciation they were inspired, like Tripp’s daughter, to “do likewise.” I believe Millard correctly found a deeper spiritual meaning to his ritual, reflecting on what many have observed: that the poor and the problems with the environment often co-exist. He wrote:

My daily encounters with trash gave me an insight I had not had before: There is a direct connection between trash on the streets and substandard housing. A community that tolerates trash on the streets will accept substandard housing. Conversely, a community that will not accept trash will not tolerate poverty housing. You see, trash is a visible sign of the mentality of the people in the area. That mentality is the physical environment is of little concern to them. Substandard housing is simply a larger visible sign of a lack of concern.

If we look closely, other signs are easily spotted and symbolize a community’s collective sin of tolerance of decay. A pair of sneakers dangles from the telephone lines marking the corner where one can buy drugs. Gang symbols are spray painted on buildings and stop signs. Lottery and liquor stores are often the only businesses that can economically survive in neighborhoods of blight.

But a simple act, like picking up litter can make a difference. By demonstrating that you care about the neighborhood, people will respond and also quietly engage in acts that can only be understood as evangelism.

This is why when our church youth group showed up on Elizabeth Street for their first evening of service, some of them went to work removing the gang markings from both stop signs on the block. Maybe this was just a bit of symbolism, because it surely didn’t mark the beginning of the end of gang activity and drugs in our neighborhood. Or did it?

My wife Cori was working in our yard this spring. While looking at one of the gardens at the edge of our property she discovered a large vine and asked a friend and former Koinonia resident, Bob Burns, to identify it. Cori was worried that we might have an invasive weed problem that would eventually take over our yard. Bob quickly identified the plant as wild muscadine, which if trellised could produce small but edible muscadine grapes.

I think of our wild muscadine as a parable for the neighborhoods crying out for our help. We can choose to ignore them and treat them as a weed, into which they will surely devolve. Decay is indeed human nature. But it is also human nature to love and to want to cultivate a brighter future, one which is joyful and bears good fruit.

The Good News is that we have been given the opportunity to make a choice about what kind of community we are. I remain hopeful because of the crowd I hang around with. We invite you to join us! 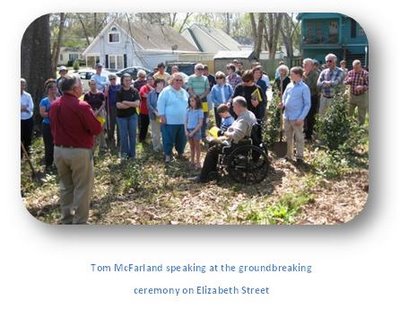