Skip to content
Day One of the Summer 2014 Ride: Atlantic City, NJ to Astoria, OR
By Kert Emperado

One year has come and gone and I find myself back in a room with many familiar faces and even more new ones. It’s the Fuller Center Bike Adventure! Oyee!!

This time around, I’m ready. I know what ‘clipping in’ means and how it feels to be one with my speedy minibike, simply named, "PSss". The shouts of ‘hole’, ‘on your left’, ‘car back’ and many more, never sounded so reassuring.

Back tracking to Thursday, there was a big 30+ train wreck! Most were named, while a few were not yet recognized. Oh man! Fortunately, everyone survived from a few laughs as we played the ice breaker name/introductions game. Phew! So many exciting new people to meet and get to know. To think, I was that first timer this time last year. The returning riders know all too well what is about to take place on this cross country, nine week, service/fellowship/cycling/spiritual journey. It is life changing! Well, it was for me and many others who’ve embarked on this adventure before. It’s great to be back!

In the mix of introductions to putting bikes together, so much information about routes, service/build projects, and simple living, was shared by the group, specifically our returning trip leader, Melissa Merrill, and FCBA founder Ryan Iafigliola.

Similar to last year, our team consists of people from various parts of the United States, even as far as Alaska. And, there is Gerry, who is "from" Ohio, but lives in Australia, and has a Scottish accent. Interesting guy! We have three Mikes, and only one superman, Tom! Oops, I meant Geezerman. This time, Tom’s number one partner, Lois, has joined the support crew! Oyee! It’s a great group of people. Of course, it’s also so awesome to have my east coast buddies, "Speedy" Petey, and Aaron (the other token Asian guy from last year) back for a few days! 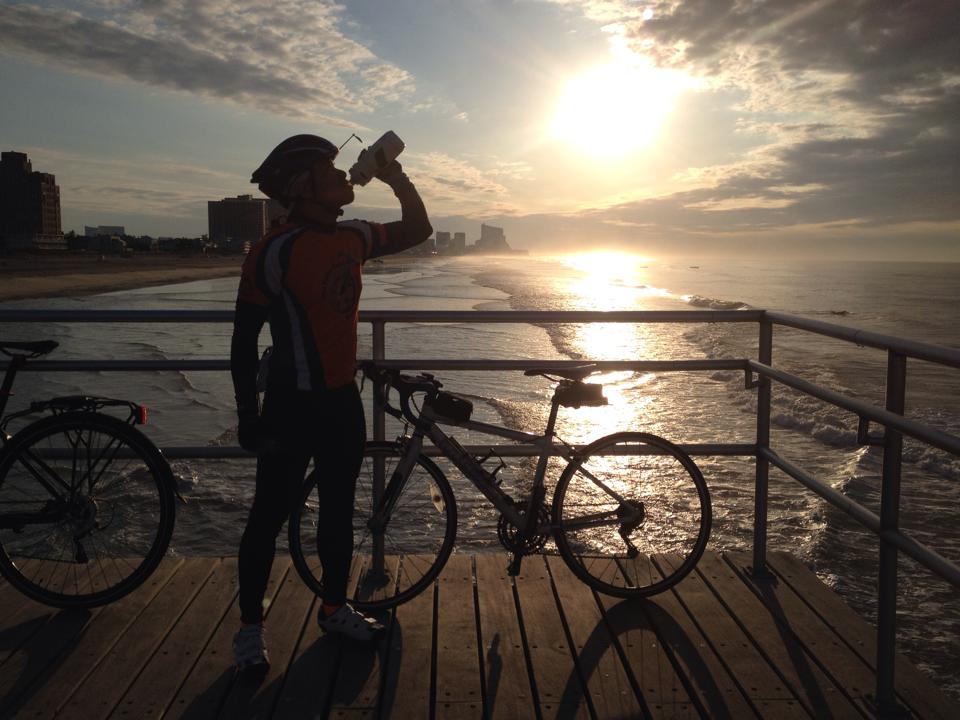 Today (Friday) was a full day of activities. Up at 0530 for breakfast and off to the rising sunlight on the Atlantic City Boardwalk for our 10 mile test ride. It was beautiful! Soon after, we were off again to our first build project. We had the opportunity to spackle (or spankling) sand, paint, and put up drywall for a home owner named, Fred. Like hundreds of other homes and businesses in the area, his house was destroyed by Hurricane Sandy a few years back. We learned that Fred and wife just had a new born baby. Let’s get this home done for them!
After a long day of biking and building, a good shower and a spaghetti dinner, which was just what we needed and it was exactly what we received. Thank you Atlantic City Long Term Recover Group Volunteer Center and the Fuller Center of Atlantic City! Oyee!!!
Not too bad for a first day huh?