An awful lot of what you need to know about Tom Weber can be gleaned from a short conversation he had with his doctor after dislocating his shoulder when the Fuller Center Bike Adventure team’s van crashed on an interstate near Burley, Idaho. 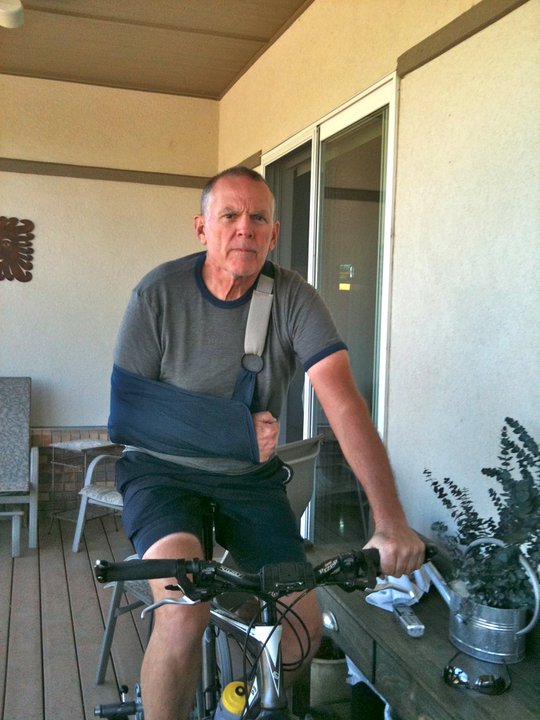 “Basically, Doc said I was gonna be out eight to 10 weeks,” said Weber, who at age 69 is the Adventure’s oldest participant. “I said, ‘No, that ain’t doing it. What else can we talk about?’”

Weber spoke today from the road. His wife of 45 years, Lois, is driving the Broomfield, Colo., resident to Salt Lake City, where he will rejoin the Bike Adventure team for the remainder of the 3,600-mile journey to Washington, D.C.


Friday is an off day for the team before a 50-mile trek to Heber, Utah, on Saturday and then a 98-mile ride to Roosevelt, Utah, on Sunday.

Weber’s doctor knew better than to try to hold him back.

“He said the first two weeks was the only real danger period,” Weber said. “So I rested two weeks and let everything get back in order. Now, it’s just a matter of how much pain I can handle.

"I think it’s awesome," said Allen Slabaugh, leader of this year’s Fuller Center Bike Adventure. "He’s worked hard to get himself ready. I’m a little surprised he’s joining us in Salt Lake instead of Denver, but it just shows how passionate he is about this and about the work of the Fuller Center. It’s just phenomenal."


A long-time cyclist and avid tennis player, Weber is an Air Force veteran who grew up a huge Cubs fan on the North Side of Chicago has since taken up volleyball and even ballroom dancing in his retirement. But cycling has be a lifelong passion.

“I’ve been waiting since 1960 to do a cross-country ride,” Weber said. “So I went poking around the Internet and found the Fuller Center and thought, this sounds interesting. Then, I got to reading Millard Fuller’s story and looking at what this organization does and how it changes lives. It has come to mean a lot to me.”

The Fuller Center Bike Adventure raises money for and awareness of The Fuller Center for Housing’s fight against poverty housing. Though the team’s van and support trailer were destroyed in the crash after a tire blowout on the interstate, donors quickly stepped up to help fund the purchase of a replacement van and provide a replacement trailer that the team will pick up July 11 in Colorado Springs.

To donate to the Bike Adventure or the Fuller Center in general, click here.