When Scott Smothers, a regional manager for media giant Thomson Reuters, won the Stu Wolfer Distinguished Service Award for outstanding service to his company and his community, he also received $5,000 to donate to the charity of his choice. He didn’t have to think about it very long.

“I’m involved with a lot of different charities, but The Fuller Center for Housing holds a big place in my heart,” the Raleigh, N.C., resident said Thursday during his first-ever visit to The Fuller Center’s simple but decent headquarters in Americus, Ga. “It was just an easy choice for me. I knew what a big difference a little money could make and that the money’s going to flow directly where it’s going to make a difference. Poverty housing and working with the impoverished is so important. To me, it was a pretty easy choice.”

The Stu Wolfer Distinguished Service Award is named for a Thomson Reuters employee who took leave from the company to serve in Iraq, where he was killed by mortar fire.

The Fuller Center is hardly a name he pulled 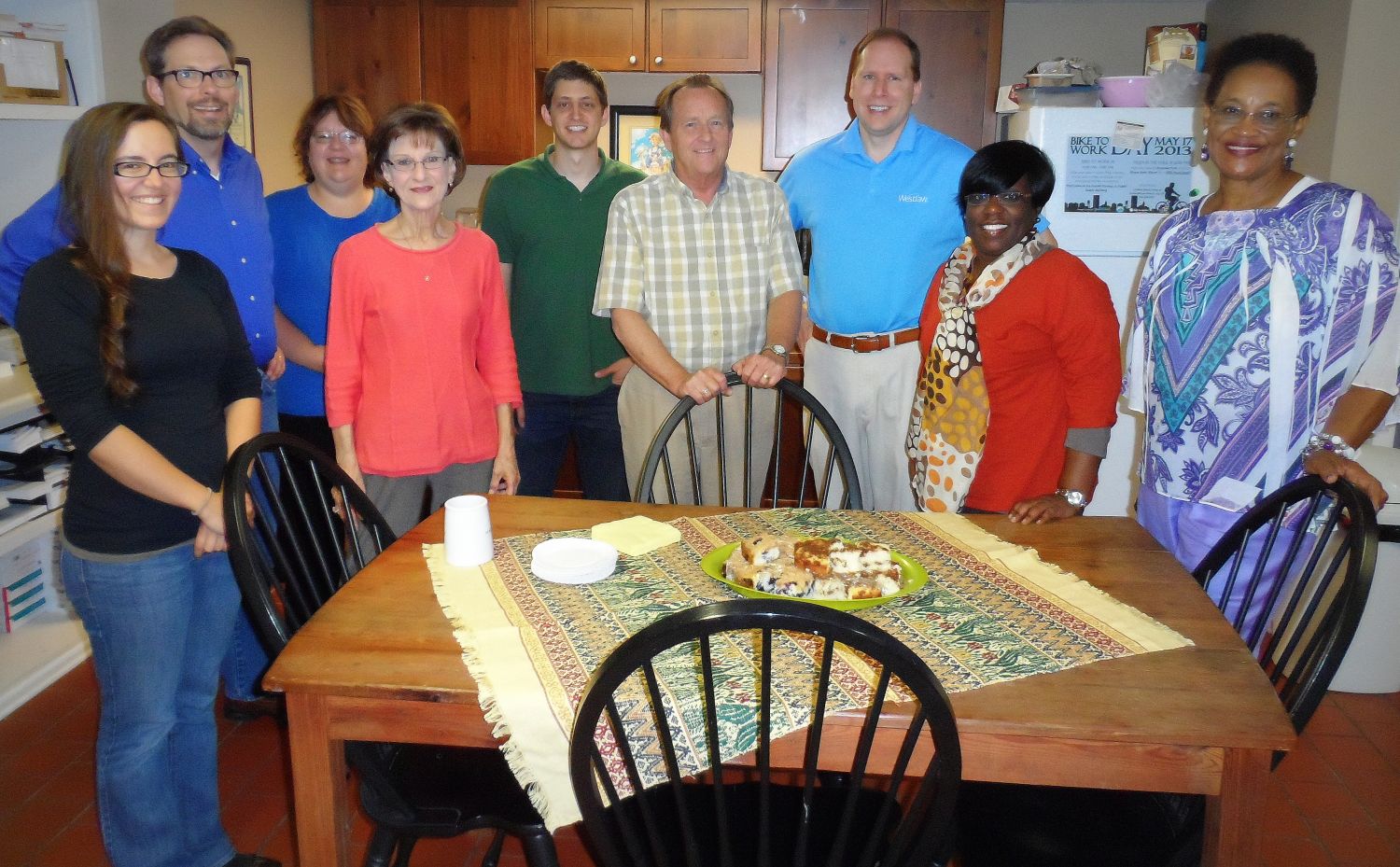 out of a hat, although he first learned about the grass-roots housing ministry only three years ago when the Fuller Center Bicycle Adventure came through North Carolina on its way from Niagara Falls to New Orleans. A friend from Asbury United Methodist Church, Mark Benjamin, recruited him to spend three days on the ride helping to raise money for The Fuller Center’s work in El Salvador. He could have stopped at that but didn’t.

“On that bike ride, we decided that instead of just raising money, we should actually go down and visit the site and help build and do what we could,” he recalled of planning a 2011 Fuller Center Global Builders trip. “We just had a great time. Got to play with the kids and got to know several of the people there. Nineteen of us ended up going, and 16 out of the 19 had never been on a trip like that before.”

One of the kids they met was a then-11-year-old named Blanca, daughter of a Fuller Center homeowner partner. Blanca captured the team’s heart with her smile and spirit despite her struggles with a poorly designed prosthetic leg she got at a younger age after a bus accident. The team pulled together and helped her get a new prosthetic leg last year. (Read about that effort here.) Many members of that team plan to return to El Salvador in July.

“One of the things that’s exciting about The Fuller Center is that it gives people an opportunity to not just give cash but to give of their lives and get involved and be a part of it in a meaningful way,” Snell said. “Scott’s an example of that. The Bicycle Adventure is a great way to have fun, but a building project is a great way to actually touch the lives of the people we work with. That’s what Scott experienced in El Salvador.”

Part of Smothers’ responsibility in accepting the award is that he tell others within Thomson Reuters how the money is being used. That is one reason he visited Fuller Center headquarters during a work trip to Georgia.

“We come back and talk about our experiences as a volunteer and the different things that we’re able to do and also where the money went,” he said.

Snell said that as a passionate volunteer and donor, Smothers will make a great ambassador within his company, which puts a great emphasis on community service.

“The most important thing we can do is tell our story — because it’s a great story,” Snell said. “And when people hear the story, they like it. But we need more folks like Scott out there telling that story. One of our purposes as an organization is to raise awareness about the issue of housing. There’s a lot of people who live in a town and never get into the neighborhoods that need their help the most. It’s almost invisible in some places, but it exists and is a huge problem around the world. When people know about it and realize that they can actually reach out and get involved, it’s pretty compelling.”

Thomson Reuters has a charitable foundation and many community outreach programs, as well as encouraging volunteerism by giving employees two paid days a year to volunteer. Smothers said it is not good only for the community but also for the company.

“They get happier employees, and they get more dedicated employees,” he said. “You get a place that people want to work. We watch every dime that goes out, but at the same time we realize that we are members of the community and we try to be good members of that community.

“Our company has 55,000 employees worldwide, and when you’re a member of that worldwide community and want people to like being where they’re at and give their most there, you have to also treat them as human beings and treat them fully. And when you do that, it’s amazing and you get a much better employee. So doing things like volunteering and encouraging people to volunteer, it changes the way they view the company they work for.”

Snell appreciates the efforts of Thomson Reuters and believes it is a trend — and a trend worth encouraging.

“A lot of companies are moving toward this,” Snell said. “It does a number of things. It gets their folks out of the office and engaged in something bigger than the business that they’re in. It expands their horizons. I think it also expands their capacity to work. They have a better understanding of what the world’s like and the role they have in it. It’s also a great experience for morale-building. Companies that give are companies that endear themselves to their employees. By helping the employees get out and volunteer, they not only expose their employees to things that they otherwise might not see, they also tie their employees closer to the company.”