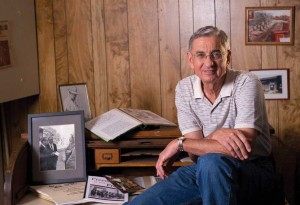 Millard Fuller, the founder of Habitat for Humanity and The Fuller Center for Housing, died early Tuesday morning after a brief illness.  An autopsy revealed the cause of death to be an aortic aneurysm.  He was 74. Family and friends are mourning the tragic loss of a true servant leader and a genuine heart.

Millard was buried humbly on Picnic Hill at Koinonia Farm on February 4 at 11 a.m. Millard wished to be buried in the same manner as his spiritual mentor and friend Clarence Jordan, Koinonia’s founder. Like Clarence, Millard was laid to rest in a simple box and has no headstone on his grave.

To view photos from the funeral and burial, visit our photo gallery. More stories and photos will be posted in the days ahead.

Linda Fuller, Millard’s wife of 49 years and the co-founder of Habitat and The Fuller Center, said that great strides have been made toward fulfilling Millard’s vision of eliminating poverty housing around the world, but that there is still tremendous work to be done.

“Millard would not want people to mourn his death,” Linda said. “He would be more interested in having people put on a tool belt and build a house for people in need.”

Former President Jimmy Carter issued a statement in which he called Fuller “one of the most extraordinary people I have ever known.

“He used his remarkable gifts as an entrepreneur for the benefit of millions of needy people around the world by providing them with decent housing,” Carter said in the statement. “As the founder of Habitat for Humanity and later the Fuller Center, he was an inspiration to me, other members of our family and an untold number of volunteers who worked side-by-side under his leadership.”

After pausing on Wednesday to honor the leader who inspired us all, Fuller Center staff in 25 states and 15 countries are back at work, raising funds and awareness and building and repairing houses, as we have done since 2005.  The family and staff kindly request that donations be made to The Fuller Center in lieu of flowers to help us continue the great work that is Millard’s legacy.

For more on Millard’s life and work, click here to read Millard’s biography.