I roamed the countryside searching for answers to things I did not understand. ~ Leonardo da Vinci 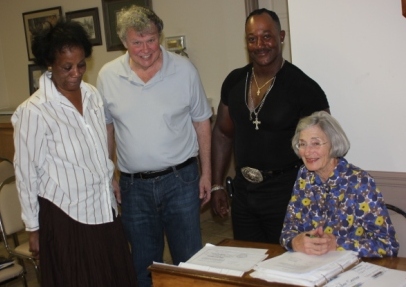 My purpose was to attend the monthly board meeting of the Southwest Quarter Fuller Center for Housing.  What I found was a small, faithful, diverse, salt-of-the-earth team anxious to meet the new Director of U.S. Field Operations and to tell me that they wanted to build their first Fuller Center house, but they were not sure they were ready.

President Jean Armour introduced me to their Treasurer Charles Ferguson and Sara Singer, an Emory alumnae who served as secretary.  They warned me that another board member would be late as he was parking his horse.  Really.  Pastor Alphsao Seldon arrived in cowboy boots and sharp shiny spurs as he just finished riding in the Stewart High School parade.

I looked over their paperwork and found a few items we needed to complete but everything was in order. I asked if they had selected their family.  Miss Jean said they had indeed picked a single mom with three children are living in a rough government housing project.

“Do you have any property?” I inquired.   A lot had been donated in town.

“Well, do you have any money?”

Treasurer Charles Ferguson pulled out a bank statement from today, and I noticed that the other board members were holding back grins.

I replied, “Millard always said it would be fiscally irresponsible to start a house without one dollar in the bank, and you have enough to get a house in the dry…. Let’s build a house!”

I asked if they knew of a contractor that could secure a building permit.  They did.

“We have a black one with no letters on it,” they replied.

I told them that I knew an excellent sign maker just up road in Cusseta.

Rev. Seldon closed the meeting in prayer, and I suspect rode off into the setting sun thinking about coming back to town soon, only in work boots next time.

In 1988, I started a Habitat affiliate in a town of only 76 people. Early on, I’ve developed the belief that the knowledge of how to run a housing ministry already exists in every community. Our Appalachian mountain program (Almost Heaven Habitat) grew to be the most productive rural Habitat affiliate in the United States. I’ve seen this dynamic in the Congo jungle village of Bolomba where the Fuller Center is building and I believe it is a universal truth in every community around the world.  The Fuller Center loves our rural partners.

The simple, decent Fuller Center organizational model helps this existing knowledge manifest in the form of locally owned housing ministries.  All you need in your town are three Cs and three Fs:

In a few months a single mom and her three daughters will be picking out paint colors for their new bedrooms in a little town called Lumpkin.  You may not have ever heard of Lumpkin, but God knows just where it is.  I know this because tonight I found God’s people there.