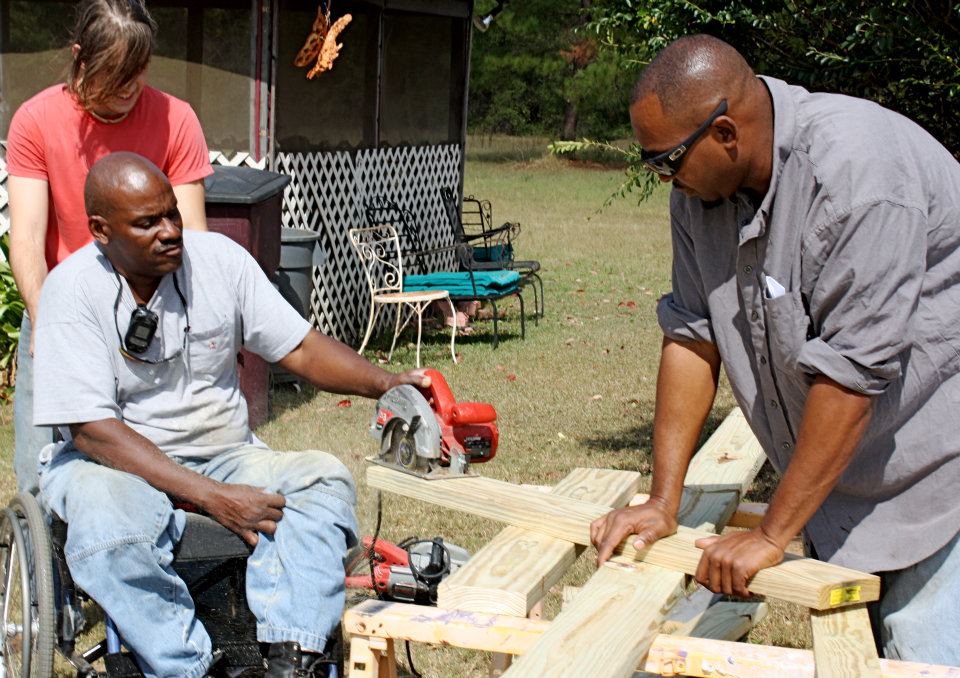 I wrote about Americus resident Thad Harris in a blog post a little more than a week ago. I wasn’t expecting to talk about Thad again this soon, but I must.

I visited Thad yesterday in the Fuller Center home of which he is so proud and on which he spent so much time working. Thad has long wanted to find a proper way to thank The Fuller Center and its volunteers and donors for offering him a hand up. The many hours he has spent volunteering with us to help others since he got his home could certainly be considered thanks enough. He was at it again last weekend, working at a Fuller Center construction site during our Faith in Action weekend.

But Thad wanted to put his appreciation into words, and for some reason he thinks I know a thing or two about writing. (I’m sure some of my high school teachers and college professors would disagree!) Thad showed me some things he had written in a notebook about his life-changing experience and regaining his independence as a homeowner, which gave him the courage to ask his wife Leala to marry him. They celebrated their first Christmas together in the home last December.

We talked further about how to craft a thank-you letter that would encourage others to support The Fuller Center for Housing. I told him to just speak from the heart. Despite all the rules drilled into us by teachers and professors through our school days, the best stories are usually unbridled words from the heart.

But before Thad would set to work on pouring out his heart, he opened it. He made us pause so that he could pray to Jesus, out loud, that he would use the right words to help us further our mission. What he came up with, sometimes with misty eyes, was a letter filled with inspiration that is, ironically, almost beyond words.

At the bottom of this post, I’m sharing the letter that Thad gave us and that we will share with others. I’ve dressed it up with a photo and word processing, but the words are all Thad’s and truly come from his heart. I encourage you to read and share it. But you should know Thad’s story before you do. Following is an excerpt from a recent Fuller Center publication:

When Thad Harris was a child, those who opposed his mother’s Civil Rights work once held him down in a bed of fire ants. It was meant to be a message of intimidation to his mother. But neither Thad nor his mother was the type to be held down.

Thad grew up to become a responsible, hard-working man in the construction business. But in 2001, his life changed forever when he was thrown from the back of a work truck, an accident that left him paralyzed and confined to a wheelchair. His construction career was over, and his independence was gone.

For nine years, he lived with his parents, a victim of his injuries. Then he learned The Fuller Center for Housing was building an energy-efficient duplex in Americus, Ga., for Chuck Davis, a man with cerebral palsy who was also confined to a wheelchair. Thad seized the opportunity to own the other half of that duplex on terms he could afford on his limited income.

Like Chuck, Thad worked hard alongside volunteers to build his home, one that is custom-designed for its wheelchair-bound owners and that earned the Gold Star rating for energy efficiency.

“The impossible happened, a miracle,” Thad said. “It gave me a sense of being. It was like something inside of me woke up, and the years before were just one long day.”

Not only did Thad log well over his required 500 hours of sweat equity in building his own home, but he also has since become a passionate Fuller Center volunteer. Neither fire ants nor paralysis can keep Thad down. 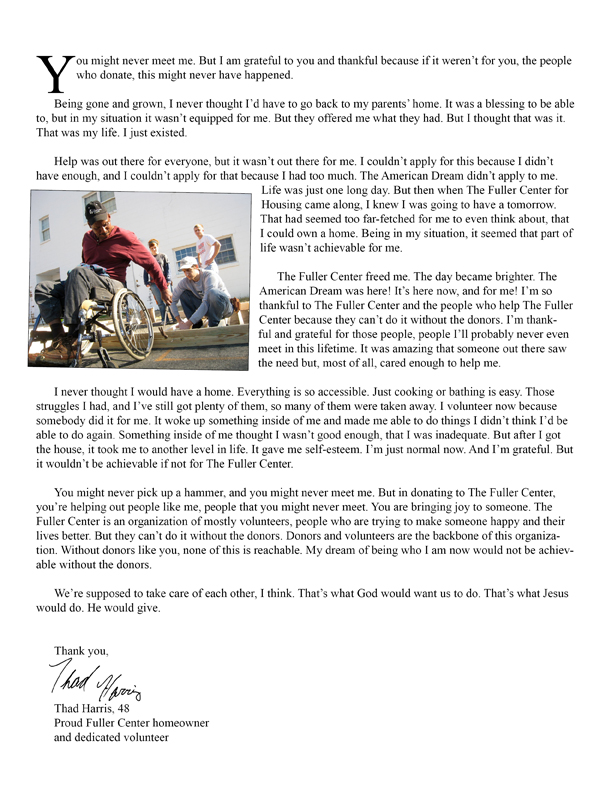