Despite the rain and an early 4:30 wake up today, we had a great ride. Although I miss the woodland scenery, the flat lands of Ohio are a welcome change after the mountains of Pennsylvania. The entire route today was along the coast of Lake Erie, which was a comforting sight for this Michigan girl. Also I broke a personal record and rode my bike with no handlebars for almost 6 miles! Beyonce (my fierce red bicycle) got her second flat of the trip today (don’t worry mom, I had my hands on the handlebars when this happened). Although inconvenient, I felt overwhelmed by the care and support of everyone here. Not only did several people stop to help me; but also they were so quick to offer their tubes, pumps, CO2 cartridges, and so on. This ride has allowed me to meet some of the most sacrificial and selfless people. From the exceedingly hospitable hosts in the places we stay, to my fellow riders, to even the owners of the homes that we help build (people who already have very little)- the general attitude seems to say “what is mine is yours and your needs come before mine.” I feel both blessed to be in this community and have been challenged to become more like the wonderful people around me. 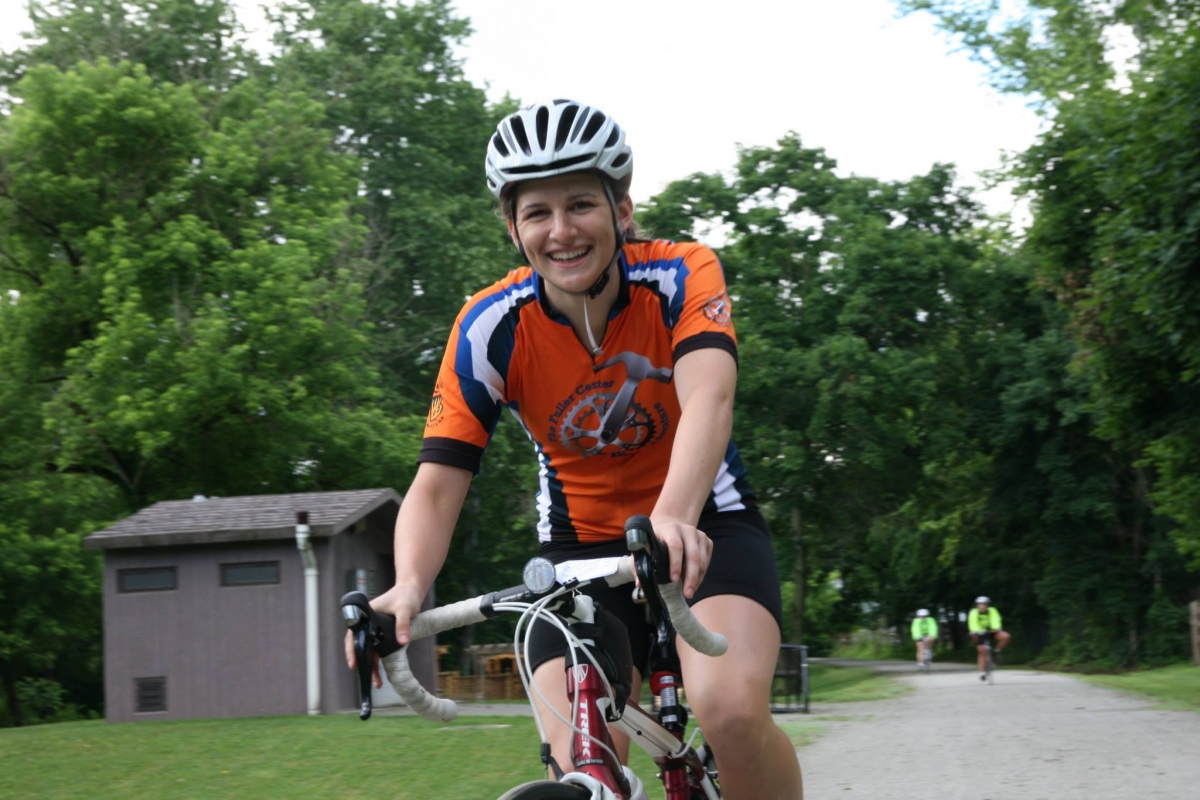 Today, the ride was going very smoothly and everyone seemed to be having a good day. After two

weeks together, we have really gotten a vibe on how to ride as a group. Unfortunately what seemed to be an ‘easy’ day turned when 6 people took a spill on a slippery bridge. Although a few bikes are now in need of repair, all the riders walked away okay with only cuts and bruises thankfully. The strength of this community again impressed me as everyone stepped in to help where they could, offering repairs, Neosporin, and some encouragement and most importantly- we moved on. The riders who could, got right back on their bikes and continued peddling. They had a goal and this was only a hurdle to overcome
I spent the rest of the ride thinking and reflecting. In the past I rooted my identity in being goal driven, resilient, and independent. Although in their proper place these are great qualities, I took it to a level to where I was filled with anxiety about the goals I had not yet achieved and egotistical about the ones I had. Neither mindset is healthy or Biblical. A few days ago I had a really tough time biking through the mountains. Cycling has always been something that came fairly easy to me and all of a sudden I was barely able to make it. It was humbling to say the least. As I was very slowly peddling up the mountain all I could think about was how much further it is to the top, and how we still had two more mountains and countless hills left to go. I was overwhelmed. I wanted to quit. But then I prayed (more like yelled frustrations) and felt God telling me that He just wants me to do ten more peddles. Then after that, he wanted me to just make it to the mailbox up ahead. Eventually a fellow rider said, “look Katie, you can’t see up the mountain any more because we are almost to the top!” I was so focused on being anxious about the overall challenge that I lost sight of the smaller manageable goals. Whether it’s a big mountain (or 3) or just a small peddle stroke- being obedient is being obedient.

The world we live in is full of problems. Huge problems, dark problems that are tangled, complicated, and so widespread that it seems impossible to even comprehend them, much less to solve them. Poverty housing is a huge problem that touches every nation, every people group, and is so complicated both ethically and economically. It affects millions of people. But if we focus on this then we become paralyzed and often will choose to do nothing at all. We think, “Why bother? My money and effort will barely even scratch the surface of just helping this one community!” or “I can’t solve poverty housing because I am not a carpenter, and I don’t have enough money to give that would make a difference” But God isn’t asking us to fix everything for everyone. He is asking us to be obedient in the little steps. God is not asking you to make a million people new houses. He is asking you to do what you can and give what you can to really help the one or two houses He has laid before you. It is when a whole community of people are faithful in the little steps that mountains are moved. I am so thankful that God doesn’t ask me to move mountains, He asks me to take ten little peddles, then ten more…