For many, when they hear a college professor tell them what they need to be doing, they roll their eyes or tune it out. For Ted Swartz, a light bulb went off.

He was a student at Eastern Mennonite Seminary in Harrisonburg, Va., where he was studying to become a pastor, while trying to balance that plan with his newfound love, the theater. While studying a Gospel story, he was presented with an idea that combined the two.

“A professor said, ‘Well, why don’t you take a look at this particular story as a play with characters, good guys and bad guys and conflict?’ Swartz recalls. “It was one of the Gospel stories with Jesus’ conflict with the teachers of the law, the Pharisees and so forth. It was the feeding of the five thousand. It was where Jesus was telling his disciples to beware the yeast of the Pharisees. And the inherent humor in the story struck me. 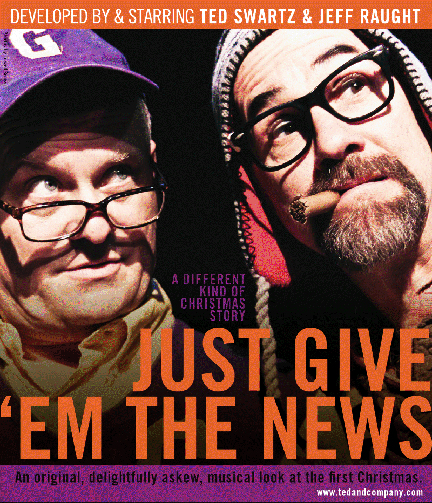 “What I pictured in my head is that they huddled together and tried to figure out what he meant,” he continued. “This image of people who were following him and just barely hanging on to the things that he was trying to teach them, and then, yet, he throws one more curve ball at them.”

What he wrote after being inspired by the professor became a monologue that became part of a presentation that would one day become a show called “Fish Eyes,” which he has performed more than 1,500 times.

It began a career that has spawned more than a dozen other shows, including “Just Give ‘Em the News,” which he and partner Jeff Raught will perform at 7 p.m. on Sunday, Nov. 27 at Central Baptist Church in Americus as a benefit for The Fuller Center for Housing’s Americus-Sumter covenant partner, based out of the international organization’s headquarters in Americus.

“I went to seminary to be a pastor, obviously, but part way through I fell in love with theater and specifically comedy sketch work,” Swartz said. “I started looking at biblical stories a little bit differently. I started trying to find out where there was humor inherent in the story and then trying to mine that. It’s about trying to find where humor lies within that human reaction.

“I believe that when you find the humor in a story that you find in a unique way perhaps where the humanity is in the story,” he continued. “It’s really flipping the equation around. So much religious theater is trying to take everyday life and put the sacred into that. And I believe that the reverse is much more fulfilling – trying to take the sacred story and put the humanity in it.”

“Just Give ‘Em the News” is a humorously askew and musical take on the first Christmas, complete with original songs. Raught is the primary musician.

“He brings the musical element and acts some sketches with me, too,” Swartz said. “It’s a combination of monologue, song and sketches, the show that we’re bringing down. Jeff has written some wonderful and very, very funny songs. One of our personal favorites is ‘Get Mary Off the Donkey, She’s Gonna Have a Baby Tonight’ done in a very blues style.”

As someone who has studied the Bible thoroughly, Swartz is comfortable mining the Scriptures for humor. It’s an area few humorists dare to tread for fear of offending the faithful. Swartz believes he strikes the right balance between tickling funny bones and staying true to the Gospel. Yet, even he has stepped on a toe or two.

“It happens every now and then, but a lot less so than it did 20 years ago,” he said. “I think if people are really open to the idea of it, they’ll see that the story that they hold precious is not changing. There’s a difference between sacrilegious and blasphemy. If they say it’s sacrilegious, then I say that’s probably pretty good because to be sacrilegious means to go against the teachings of the church. To be blasphemous is to go against the teachings perhaps of God. We get those confused sometimes.

“So when when people say it’s sacrilegious, then I say, ‘Well, it might be your problem more than mine because I’m not changing the story. I’m just mucking around how we get to it. That’s all.’”

Tickets for the Nov. 27 performance of “Just Give ‘Em the News” are $10 for adults, $5 for students and $25 for a family (up to five members). For more information, call 229-924-2900 or email alyssah@fullercenter.org. To learn more about Ted Swartz, go to www.tedandcompany.com.