When Fuller Center Director of International Field Operations Ryan Iafigliola visited Nicaragua in January 2012, he came back with a new covenant partnership — and an image he could not shake.

While touring the quaint Pacific Coast fishing village of Las Penitas, he saw the most pitiful of shacks. At the shack, he encountered the most happy and generous family. It was there that Jazmina and her husband Carlos lived with their four children — Jose, Cindi, Carlito and Yasser. The children could not contain their laughter as Iafigliola practiced his Spanish with them.

He could not get those children’s smiling faces out of his head and was thrilled to learn that the family was selected as the first partner family to build a new home with the Nicaraguan Fuller Center. That build began two weeks ago when Brenda Sawyer led the very first Fuller Center Global Builders trip to Nicaragua — where they were received by some as family and others as rock stars. The work continued last week with the second Global Builders trip to Nicaragua by a team from Georgia Southwestern State University.

“When I visited the project more than a year ago, I remember seeing the sad structure where this family had to call home,” Iafigliola said. “But I also remember something else: how much those older two kids loved to laugh. It was loud, fun and infectious. The whole family exhibited such a positive spirit, as even the father who is a fisherman insisted on giving us a gift of dried fish. It was an amazing feeling when I learned that this particular family had been selected for the first house.” 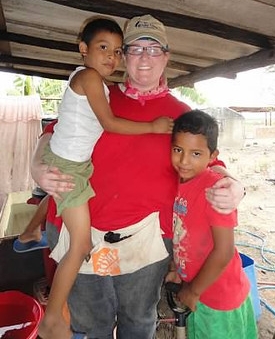 Volunteers on the trip know exactly why the family made such an impression on Iafigliola; after working alongside the family all week long, the volunteers developed a deep affection for the family.

“I just loved the entire family,” volunteer Mary Ann Turner-DeJesus said by phone after returning to her office in New York City. “Everyone worked. The mother was in a skirt and pair of flip-flops and probably didn’t even weigh a hundred pounds, and she’s carrying a hundred-pound sack of cement on her shoulder in flip-flops. They just worked so hard and were so excited about the house. Every one of them was sweet and welcoming and fun.”

“They worked really hard,” Sawyer said during a brief stop at Fuller Center headquarters on her way back home to Maine. “They were all in there in between cooking dinner on a fire and washing clothes and caring for the kids, Jazmina was still out there shoveling dirt with the rest of us. Extended family members came from away to spend the week building.”

The youngest member of the family, 4-year-old Yasser, took a special liking to Turner-DeJesus.

“He didn’t want to know my name — he’d just scream out in a high-pitched voice, ‘Mi amiga! Mi amiga!’ whenever he wanted my attention, and he would hurl himself in the air, and I’d have no choice but to catch him – which I loved,” she said. “So I was flipping him around and giving him piggy-back rides as I dumped wheelbarrows full of dirt.”

Both Turner-DeJesus and Sawyer have made multiple build trips, so they have seen many shacks like the family’s home that sits directly adjacent to the new home that is nearly complete. So they were not in shock at the sight. But they were impressed with how the proud family kept their home as well as they could.

“I can’t say I was shocked because I’ve been exposed to (the sight of shacks),” Sawyer said. “You see their living conditions and how many people are living there on dirt floors, and yet every day they were cleaner than us. That’s always the thing that surprises me the most.”

“They worked hard, and everything they had was clean,” Turner-DeJesus said. “I actually saw them sweeping dirt. They kept everything neat. … Even the kids, if you saw them dirty, you’d go to lunch and come back, and they’d just been bathed. They were super-clean with clothes cleaner than I’ve ever seen, and they’re working in them. Every time you turned around, if they weren’t working on the site, they were doing things around the house to straighten up. They didn’t really sit much.”

While the volunteers spent much time with the family under the shelter that amounts to their outdoor living room and kitchen, they did not see where the family slept until the last day.

“They had this big overhang outside the two rooms of the shack, so we didn’t really go into there,” Turner-DeJesus said. “But on the last day, we did because they wanted to show us where their chickens nest under their bed. So they pulled back the mattress so we could see the chicken sitting on her nest with all the eggs.” 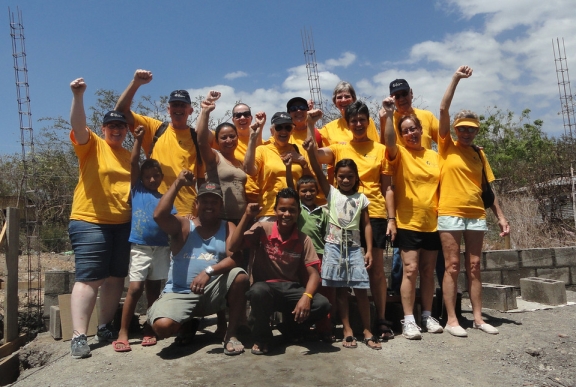 Turner-DeJesus and Sawyer also have met many grateful, hard-working families before. But an especially strong bond formed on this first Nicaraguan build between the volunteers and the family. That bond was never more evident than when it was time to leave.

“There were a lot of tears,” Sawyer said of the team’s departure. “I felt bad for the children because I’m not sure the children had ever seen their mother cry. But then I think the kids came to understand because we kind of laughed while we were crying. They welcomed us like we were family. We had a lot of good laughs together and cried at the end together. It was just a very deserving, hard-working family.”

“I really bonded with the family,” Turner-DeJesus said. “The 4-year-old and I cried as we hugged to say goodbye. And the two older children were holding me at the same time I was holding the 4-year-old. I was trying not to cry, then I looked out and saw Jazmina, the mother, crying, and I just lost it.”

But the volunteers did not bond only with the family. The entire community around Las Penitas welcomed the team.

“The community was so welcoming that we felt like rock stars because we were the first team, which I didn’t even realize when I signed up,” Turner-DeJesus said. “ The community is fantastic. Everybody said hello to us. We felt so special and honored to be there.”

Though it was the very first Global Builders trip to Nicaragua, Sawyer’s team gave the local group rave reviews for its organization. That has a lot to do with the fact that the team behind the Nicaraguan Fuller Center was ready to hit the ground running seven years after having first contacted Fuller Center founder Millard Fuller about joining the ranks. Also, Sawyer had extensive previous experience building in Nicaragua with Habitat for Humanity.

“I was very impressed,” Sawyer said of the Nicaraguan Fuller Center. “I’ve done a lot of volunteer work in Nicaragua, and I thought they were very well organized.”

No one was happier to hear the glowing reports than Iafigliola.

“This project has been a long time in the works, and it’s awesome to see it getting off to such a great start,” he said. “Nicaragua invited The Fuller Center, and, similarly, this community within Nicaragua invited the new Nicaraguan Fuller Center. Their community leadership is committed to improving not only their housing but also their whole village. They have already been working for improvements in their schools and drinking water, and we’re excited to begin helping them with one of the most overwhelming issues facing them, their housing.”

While the build experience went well, the covenant partner was well organized and the family and community welcoming, the exotic beach location where the volunteers stayed was the icing on the cake.

“The location could not be beat,” Turner-DeJesus said. “It was just this beautiful, pretty rough water; there was a lot of surfing at this beach with a strong undertow. There were beautiful sunsets, and we were always back in time at this little restaurant and bar with the hotel where we could just sit with our little drinks in the afternoon and watch the sunset and talk. It was really nice. The location of the beach was spectacular. All night, as you were sleeping, if you woke up you could hear the crashing of the waves. I actually liked waking up because it reminded me that I’m sleeping next to the ocean. And the hotel took great care of us and made great food for us.”

Of course, locations like that also have their cons, like heat and an array of insects. But Turner-DeJesus expects the Nicaraguan Fuller Center to become a very popular destination for Fuller Center volunteers looking to change lives outside the United States through the Global Builders program.

“It was exciting to be the first team there and wonder how things were going to work,” Turner-DeJesus said. “And the covenant partner there was amazing. I’m very excited for them because if the first trip went this well, imagine how much better it’s going to get as they incorporate any feedback.”