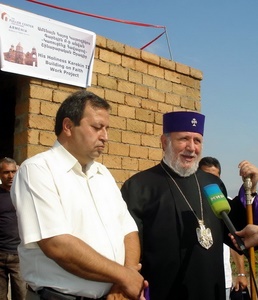 On July 21, the Supreme Patriarch and Catholicos of the Armenian Orthodox Church, His Holiness Karekin II, blessed the launch of the Fuller Center Armenia’s “Building on Faith” project in the village of Haytagh of Armavir region, Armenia.

The partnership will result in the completion of at least 37 homes. Twenty houses will be built in six regions of Armenia thanks to generous donors of the U.S. Eastern Diocese of the Armenian Church.

“We express our gratitude to our sisters and brothers overseas for their contribution, for their concern about our homeland, for lending their hands to the poor ones here,” said His Holiness Karekin II during the opening ceremony.

On June 16, a partnership agreement was signed between the Fuller Center for Housing Armenia and Armenian Apostolic Church to combine efforts to eliminate poverty housing in Armenia. The blessing and opening ceremony was held July 21.

“It is a great honor for us to work side by side with Armenian Apostolic Church, and we share the same mission to help our people in housing need, by advocating the right of everyone to have a decent shelter,” said Ashot Yeghiazaryan, the president of Fuller Center for Housing Armenia. ”We get together around the same idea of helping these families to build at their homeland, to create at their homeland and to live at their homeland.”

The 37 homes for families in need of housing, symbolizes the 36 Dioceses of the Armenian Apostolic Church plus the Mother See of Holy Etchmiadzin, the spiritual headquarters of the Armenian church.

The Archbishop Khajag Barsamian, Primate of the Diocese of the Armenian Church of America (Eastern) spoke during the blessing of the Fuller Center For Housing Armenia project as well.

“Communities of the U.S. Eastern Diocese of the Armenian Apostolic Church wish to express their love, devotion and concern towards their compatriots, living in their far away Homeland, not only by financial contributions, but also, as you can see, by their volunteer work—coming to Armenia and building with and for the homeless families,” he said.

Fuller Center for Housing Armenia assists in building and renovating safe, simple, comfortable homes, with and for low-income families in Armenia. Visit their Web site here. Click here for a calendar of upcoming Global Builders trips to Armenia.