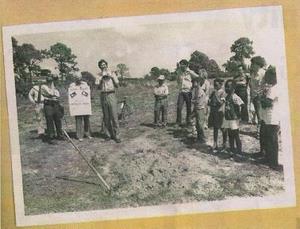 In 1979, the Mission Board of Lee County, Fla. invited Millard to visit Ft. Myers and share the story of his housing ministry idea.

To start an affiliate, you need a piece of plywood, paint it white and write the words "Habitat for Humanity" on it. Put the sign in the ground on the piece of property you plan to build the house on. Start digging the footers for the foundation. But if you don’t have the money you need, fill it up and start the process all over again.

The mission board thought, "What on earth are you talking about?" They wanted to build homes, not dig in the dirt. But they did as they were told.

A couple of weeks went by and a man in a red pickup stopped by and said, "I drive by here every day and I see what you are doing." The group pointed to the sign and said, "We’re building homes for people who cannot afford a safe and decent place to live." This gentleman was a contractor and ended up funding the first two homes in Lee County and also provided his laborers to help build the houses. 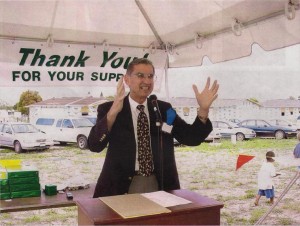 From that humble effort of stepping out in faith, this year marked the celebration of HFH of Lee County’s 1,000th new house. They dedicated the house to Millard on the day of the Millard Fuller Memorial Celebration, March 14, 2009.

We are successful because we tithe

Amazed by their milestone, Fuller Center Director of Special Programs Ryan Iafigliola asked Trish Goins, VP of Communications for the affiliate, what they attribute their success to.

In 1994, we only tithed $15 for the year, not even enough to build one house overseas. At that time, the affiliate had raised almost $3 million and kept its administration below five percent of their entire budget.

But as they increased their tithe, revenues followed suit and we continued to keep our admin costs at the same level.

We believe that our doing flows from our being. We are believers in Christ first, before we are a multi-million dollar company. What this means is that we adhere to the truths of scripture in how we operate. Giving a tithe that totals more than 10 percent of what we receive each year is our way of expressing faith in action and spreading the Good News to all nations. We believe our tithe shows that love has no boundaries. It is our way of being obedient to Christ globally while also sharing the Gospel through our building efforts locally. To date, we have built more than 750 homes overseas and now over 1,000 in Lee and Hendry counties.