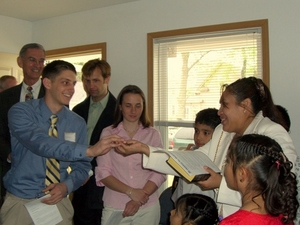 In college I became very involved with Notre Dame Habitat for Humanity, an organization that had sponsored and built one, local home each year for nearly a decade. Such an impressive feat had never been easy, but by the time I arrived it was approaching a critical tension point. The cost of construction had been rising substantially each year – by then to about $50,000 – while their ability to raise funds had not been growing as significantly.

As I became more involved with the organization, I learned that we did not participate in tithing, which to me seemed a crucial component of the ministry. In light of the incredible need around the world, it struck me as hypocritical for us to write letters and hold fundraisers asking others to give to us at the same time that we were ignoring the pleas of international projects asking us for help. How could we ask others to give sacrificially if we weren’t even willing ourselves?

When I inquired why we didn’t choose to tithe, the answer was straightforward and perfectly logical: If we tithed with the way that we’re just barely hoping to scrape by this year, we wouldn’t have enough resources to build our annual house. It didn’t take a finance major to understand that logic, although that’s what I happened to be. The math was plain to see: If we subtracted ten percent and sent it elsewhere, the spreadsheet would indicate our funds running short. I myself worried over that possibility. 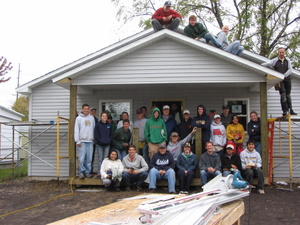 Nevertheless, I decided to bring up the issue at a board meeting. The response was not unexpected: "Well, if we have enough extra money left over at the end, maybe we can tithe with some of that."

In the Bible, God asks us to give from our first fruits – not from what’s left over – and I knew that by our current logic we’d never have "enough" left over. I began to feel strongly that this was an important decision of faith for our organization, and I said as much. The board didn’t budge.

Looking back, I think many of the members of the board thought that when I called it a matter of faith, it meant that I wasn’t grasping the situation. The math and our group’s financial position were pointed out repeatedly to encourage me to change my mind. After the experience, I came to see that choosing faith doesn’t mean failing to see both sides or being unable to understand the dilemma. Instead, it’s knowing full well that we’d be choosing a course dependent upon God.

At the end of my junior year I was elected president of the group. As we made plans for the next year, I asked our board to commit to tithing a full ten percent. By this time many – perhaps most – of the members had come to share this conviction. The rest were eager to head out for summer break and didn’t want to bother with engaging in a prolonged fight. The outcome was that we unanimously took a step of faith and made the estimated $5,000 commitment. I was excited, despite feeling suddenly unsure. Would God really provide, or had I led us down a path of pure foolishness?

The answer we received amazed even the most committed as the next year was a fundraising year unlike any we had seen before. We were given blessings – financial and otherwise – that are too great to detail, and soon it became clear that God had more than met our need for additional funds. We were thrilled and feeling blessed even before we recieved the biggest news of all.

That year, an anonymous donor contacted the university wanting to give our group "a substantial donation," which turned out to be about half a million dollars. Not content with simply meeting our need, God was blessing our meager $5,000 tithe one-hundred fold. An overwhelming sense of God’s goodness blanketed us.

Since no student group had ever received a donation like that, the university mandated it be set up to pay out an annual amount. Today, the group that used to struggle to build one home each year is now building three (two in the U.S. and one overseas through the tithe) and involving more youth than ever, all because of an act of faith.

Not every gift will be multiplied in quite this manner. Giving to God is not to be taken for a new form of financial investment that promises returns of ten thousand percent. But we must become faithful in the these little things before we can be trusted with larger things. Who knows? God may have more in store for you than you dare dream. He did for us.