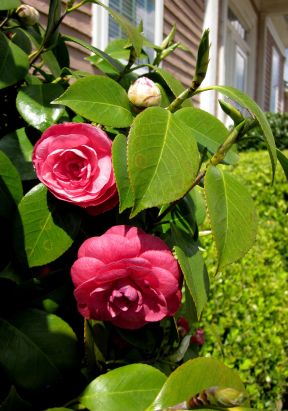 As I’m writing this, spring is in full bloom here in beautiful Americus, Ga., where it’s a mostly sunny 82 degrees at the headquarters of The Fuller Center for Housing.

Yeah, yeah, I know the Ides of March doesn’t quite mark the official beginning of spring, but it’s unofficially marked all over the place around here. And that’s OK with me. In fact, for years I’ve lobbied Congress to do away with winter and go to a calendar of two months of fall, five months of spring and five months of summer. But they don’t listen to me. If they did, we’d also have a balanced budget thanks to my program that would encourage all Americans to just one day dig between their sofa cushions and donate everything they find to the government.

So I have to endure each winter, and I seriously believe I suffer from Seasonal Affectiveness Disorder, or what’s more commonly referred to as the “winter blahs”. Of course, of all the disorders I probably have, it’s likely way down the list.

It’s not hard to see the signs of spring around here. The sun sets later. The days are warmer. Yellow pollen coats my black truck so much that it looks like a rolling Pittsburgh Steeler. I had to pick up my son from school today for the first time this school year because allergies have hit him hard. And everything is in bloom. It’s been so nice here that even our artificial plants are blooming.

Early last week, sure signs of spring came in the form of spring breakers from Davidson College and Penn State University, who were working with a couple of covenant partners around here as alternative service breaks. Few things are as uplifting as seeing service-minded youths giving of themselves and having a good time in the process. They gave me new energy. (Read and see a video about those groups here.)

Yesterday, I went to visit the work of the Southwest Quarter Fuller Center in Lumpkin, Ga., which is building its first new home. I went to meet students from the University of Idaho and do an interview with one of our most dedicated volunteer building leaders, Tim DuBois of Minnesota. He was there with his good friend and fellow Minnesotan, the equally dedicated Charlie Thell.

It was there in Lumpkin, Ga., that I saw the first sure sign of a Fuller Center spring: SWEAT. The sun was pretty intense, but just as the Penn State and Davidson students raved about the weather last week, these kids from Idaho were thrilled to be in the heat and sunshine of Southwest Georgia.

Spring breakers are fanning out across the nation through The Fuller Center’s Student Builders program. There were five teams at work with various covenant partners this week, including three from the University of Idaho alone. (Read more about that here.)

And there’s another new sign of the Fuller Center spring, the Bicycle Adventure’s first-ever Spring Ride, which is nearing its conclusion on the Natchez Trace in Mississippi. Be sure to check out the updates, blogs, photos and videos from their trip on the Bicycle Adventure’s Facebook page. They’ve gotten a lot of attention from TV stations and newspapers along the way and are doing a great job of spreading awareness and raising funds for our work.

This is my first spring with The Fuller Center for Housing, and I couldn’t be more thrilled. Maybe because I always come alive this time of year. Maybe because I’m getting married in a couple of weeks to a beautiful woman who also comes alive in the spring. Maybe because all these dedicated college kids and volunteers have inspired me. Or maybe because The Fuller Center is truly blossoming. I guess that happens every year, but I get a feeling that this year, our seventh, it will blossom like never before.

Need more evidence the work of The Fuller Center for Housing is blossoming? Click here!