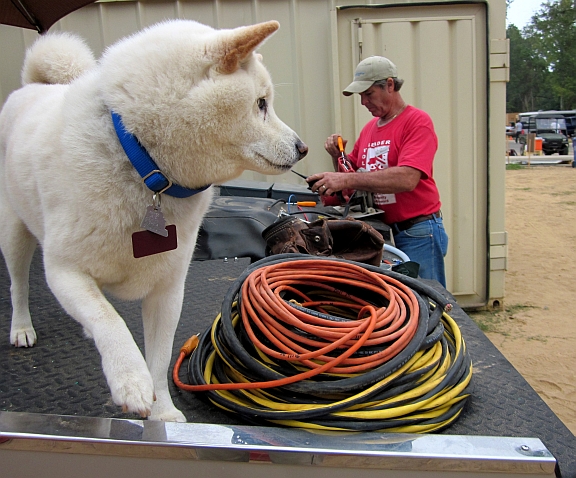 You’ve seen his truck. You’ve seen the way he stoicly watches volunteers as they work hard on the Legacy Build site while he merely chills out in the shade of an umbrella. Meanwhile, ask him if you can borrow a tool, and he won’t say a word. If you need help, he won’t even lend you a helping hand.

The irresistably beautiful and sweet-tempered pup has felt many hands caress his fur at this work site … and many other work sites over the years.

“He’s been raised around volunteers; that’s all he knows,” France said. “He’s never had a conventional home. He lives in a fifth wheel and travels the country.”

The snow white fur is instantly recognizable, but Spirit was not supposed to be white. That’s why his breeder parted with him.

“He is a pure bred, but he’s not supposed to be white,” France said. “He’s supposed to be red like his ears. So his owner sent him to an out-of-state puppy store. We we shopping at Sears for a stove top, and next door was a puppy store. And my husband talked me into getting him.”

Though he’s surrounded by crowds of strangers and a few friends while all sorts of loud noises fill the air, Spirit is always calm, cool and collected.

“It’s just his nature,” France said. “They’re normally very shy and timid and won’t go up to strangers. His place is the back of the truck. He usually has his umbrella set up, and he’ll sit up there all day long and just wait for volunteers to come up and love all over him.

“He’s the mascot. People will forget us, but they always remember the dog. They do. They really do. Our friends will say, ‘How’s Spirit?’ and we’re like, ‘What about us?’”

But volunteers aren’t the only ones who shower Spirt with love and affection.

“He’s definitely dad’s baby, but dad spoils him a lot more than I do,” she said. “I don’t give him people food, but dad does.”

Spoiled or not, Spirit is clearly a part of the Moriarty and Fuller Center family.

“He sheds a lot, but that’s his only downfall,” France said. “If he didn’t shed, he’d be the perfect dog.”