Student groups from many different colleges and universities have worked with The Fuller Center for Housing.

Covenant partners across the United States host groups for single days or entire weeks as students look to make positive use of their fall and spring time away from school on alternative service breaks. And covenant partners around the world welcome enthusiastic and energetic college students to infuse a fresh dose of energy into their projects.

While dozens of colleges around the United States have taken part in some form of Fuller Center work, several schools have teamed up with The Fuller Center time and time again. One such frequent partner school is Mercer University, about an hour-and-a-half’s drive north of The Fuller Center’s international headquarters in Americus, Ga.

The connection goes well beyond house building. Mercer honored Fuller Center founder Millard Fuller with an honorary doctorate in 1989, and Fuller became good friends with longtime Mercer President Kirby Godsey. Today, Millard and Linda’s son, Chris Fuller, is The Baptist Collegiate Ministries director at Mercer. Though no longer formally affiliated with the Baptists, who founded the school in 1833, Mercer remains a faith-based institution of higher-learning. Its embracing of Judeo-Christian values and intellectual freedom make it a natural friend of The Fuller Center.

Most recently, a team of Mercer Service Scholars became The Fuller Center’s very first Global Builders team to work with the Trivandrum Fuller Center in India. Working under the umbrella of Mercer On Mission, Service Scholars have worked in previous years with Fuller Center covenant partners in Peru and Armenia and even one day in Americus. Grant said the group plans to return to Peru next year and was thrilled with the experience in India.

“Our first experience in Peru was just really well-organized and high-quality, so that made us want to come back,” said Dr. Chris Grant, director of the Service Scholars, which accepts 15 to 17 students every year into the elite leadership, service and academic program. “I think we’ve had such great experience with The Fuller Center over the years. India was no exception. The Trivandrum Fuller Center rolled out the red carpet. They showed us so many interesting things, and we’re looking forward to partnering with them again in about three years.”

Fuller Center Director of International Field Operations Ryan Iafigliola is glad to know there will continue to be Mercer students working with international covenant partners.

“I love working with the Mercer groups,” Iafigliola said. “From the professors on down, everyone who has been part of Mercer On Mission has been a joy to work with. They bring energy to the host country that goes beyond the work site, and they take a genuine interest in the people, culture and history. Our hosts love them, and so do I. I’d love to see more colleges and universities take their lead and enjoy similar mutually beneficial partnerships with us.”

“I feel so fortunate that I’ve seen The Fuller Center’s work in different places,” Grant said. “Last year, we did a one-day project in Americus. So I’ve had Americus, India, Peru and Armenia under my belt, and I’m like, wow, this stuff is cool. The houses are different. Everything’s different. It’s been a good solid partnership for us in service learning, and we’ve been able to accomplish our program goals really well.”

Dr. Craig McMahan, Minister to the University and Dean of the Chapel, directs the wide-ranging Mercer On Mission outreach program, which taps the talents of Mercer students and faculty to not only build homes in places like India, but also to deliver water and mosquito nets to African villages, fit Vietnamese with low-cost prosthetics, improve the lives of the homeless in Brazil and bring medical care to Thailand.

Previously a congregational pastor for two decades, McMahan relishes his role at Mercer, evidenced by the beaming smile on his face as he bounds up the stairs to Mercer’s Religious Life Center exclaiming, “The team is looking good!” in reference to the newly formed Mercer football team that practices near the Center at a stadium still under construction and begins play next year. McMahan is a former college

player himself and gives you the impression he is seriously pondering slipping on a helmet and sneaking onto the field for a play or two next year.

But it’s not just the physical excitement of a college campus that makes his job “the best ministry I’ve done” in 25 years of ministerial work. It’s also the challenge of working with young adults and faculty who ask the hard questions about everything, including faith.

“I had gone through a period of doubting my faith when I was a freshman in high school,” said McMahan, who added that he could not recall ever missing a Sunday at church before that, not because he was forced to go but because he loved it so. “I found in that both a passion for study and answers that satisfied me. Of course, the same answers don’t satisfy me anymore. I think I’ve come up with new answers and maybe better questions.

“I’ve always been inclined to walk along, developmentally, people who are in that same position,” he added. “Plus, I’ve been an athlete all my life and played football in high school and college. And I always loved what the high school and college kids did. I liked their style of fun more than people my age’s style of fun. I’d rather go out and go rafting or hiking or play football than I would go to a movie.”

His enthusiasm for campus ministry, coupled with Mercer’s outstanding array of programs such as engineering and medicine, means Mercer On Mission is growing much like The Fuller Center.

“I think I’m making more of an impact on students’ lives,” he said. “I found that in church I was always preaching to the choir. Mercer’s not a place that’s completely choir. There are some choir boys and girls here, but there are also some who aren’t. It’s not that they’re anti-faith or anti-religion; they just want to kind of spread their wings a little bit. … It’s been fun trying to figure out how to be a Christian minister in a mixed campus.”

McMahan’s energy and passion is reminiscent of another man who put his faith into action to change lives — Fuller Center founder Millard Fuller, a man McMahan fondly remembers.

“I came here in 2005 and had him speak here a couple of times,” said McMahan, whose office is just a few steps away from that of Millard’s son, Chris. “He was a very-focused guy, very affable but very clear about what his mission was, charismatic, warm and, of course, a deeply committed Christian.”

Mercer On Mission and The Fuller Center: ‘A good fit’

“Partnerships that work best are those where values and principles are shared,” Snell said. “This is certainly the case with Mercer and The Fuller Center. It should come as no surprise, though, to those who know of Millard and Linda Fuller’s long history with the school. They’ve sponsored students there, and their son, Chris, carries that relationship to the next generation.

“We’re proud to have our partnership with Mercer strengthened by their most recent Global Builders trip to India, and we look forward to many more opportunities to work together,” he added.

McMahan is very specific when talking about the partnership between Mercer On Mission and The Fuller Center.

“When we do any Mercer On Mission program, there are five criteria that we use: It has to be high-impact, has to be innovative, has to be sustainable, has to be leveraging partnerships, and it needs to be replicable,” McMahan said. “The Fuller Center fits all five of those. … In my estimation, that’s why The Fuller Center is a good fit in terms of the nature of the service project.

“Also, the underlying values and principles of The Fuller Center are certainly shared by Mercer,” he added. “That is an additional reason we’re a good fit. And, third, logistically, I know that we can count on The Fuller Center to put on a good program even if it’s in a far-away place like India that we know our students will be safe, will be taken care of, and it will be a good, solid program. The Fuller Center fits our criteria, fits our values and is good logistically.”

The Fuller Center also promotes the concept that a hand up is better than a handout. It’s not just because it’s politically popular; it’s the very foundation of the partnership housing concept Millard Fuller honed after learning from Christian leader and Koinonia Farm founder Clarence Jordan, who would have turned 100 this year. Fuller Center homeowners must work and pay for their homes, albeit on terms they can afford with zero interest charged and no profits taken. The payments go back into a “Fund for Humanity” that helps others become homeowners.

“I’ve been told that it’s not Christian to expect the ‘poor’ to pay,” Snell said. “My answer is that it’s probably not Christian not to. By making their payments, they have a chance to be part of something that too often the poor miss out on — the opportunity t 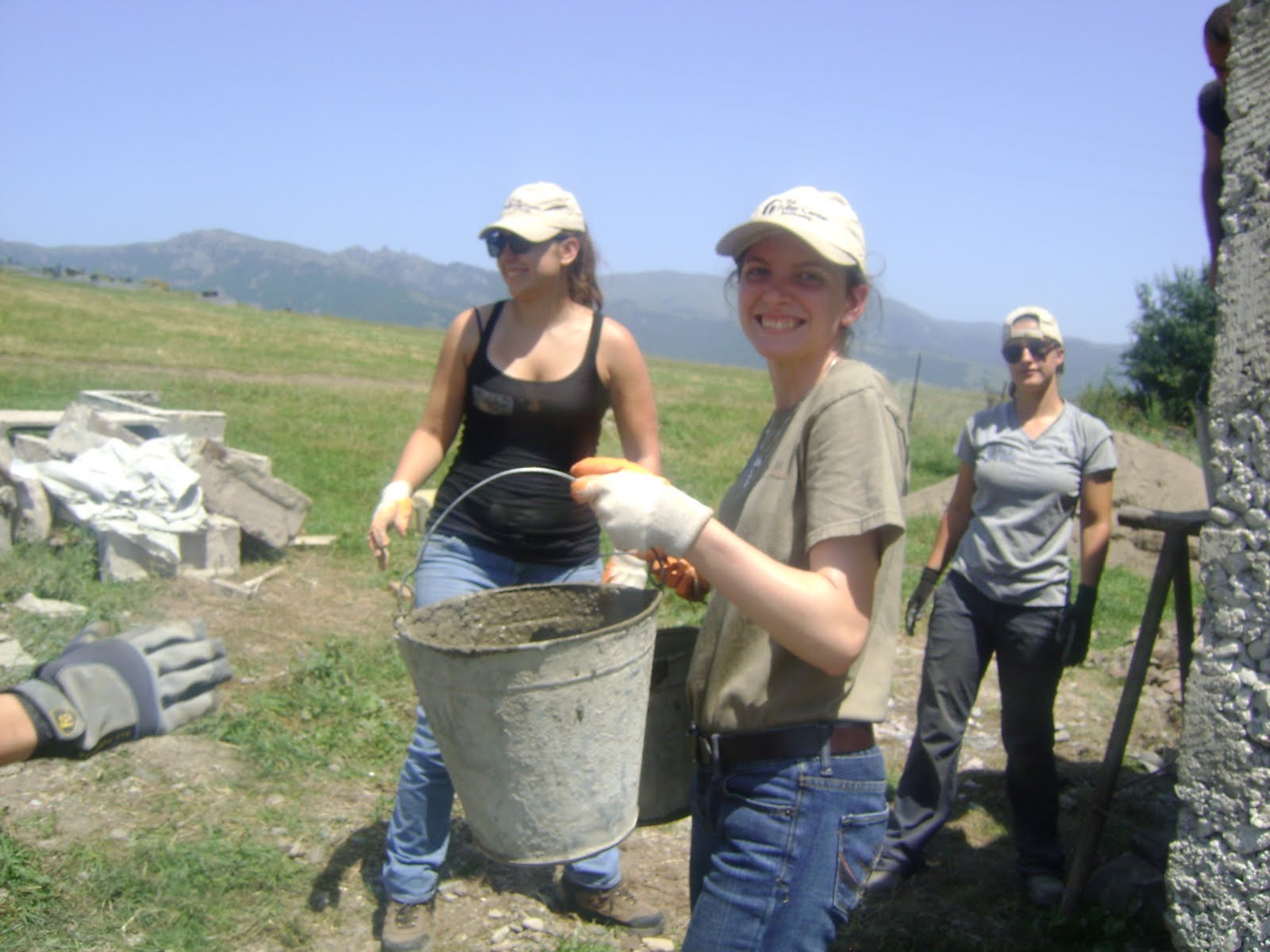 o give, and there is great joy in giving.” (Click here to read David Snell’s blog expounding upon the concept.)

McMahan has seen firsthand how well-meaning handouts can have unintended consequences, and The Fuller Center’s method of partnering with homeowners meshes with Mercer On Mission views.

“When we talk about being sustainable, that’s part of what we mean,” McMahan said. “You can’t keep handing things out. In the book ‘When Helping Hurts,’ the premise is that so many church mission trips really do more damage than they do good because they create cycles of dependency. We certainly agree that this has to be capacity-building. We don’t want to go out and hand out bread. … We’re really very keen about capacity-building.”

Another guiding principle in the Mercer On Mission program is liminality, a principle enhanced by taking trips such as those with The Fuller Center’s Global Builders, which not only go to such places as Haiti, El Salvador, India, Peru, Armenia and other locations but also go off the beaten paths within those countries.

“Liminality means we put students in strange places so they kind of re-figure what their life’s about,” McMahan said. “They can’t just be on autopilot like they are when they’re in their normal ruts. We believe that real transformation happens best and maybe happens exclusively in liminal space.”

Liminality is especially crucial to Grant as it applies to the Mercer Service Scholars, and that is another reason for repeated trips with The Fuller Center.

“We’re looking to see students develop leadership skills, to be challenged,” Grand said. “(McMahan) will talk about liminality, where you take people beyond their limits and move them into places that they haven’t experienced and have some of their notions about society, culture, poverty, faith and values challenged and be able to reconfirm things that are right and open their minds to things that may be misconceptions about the world.

“I think that we’ve had a great experience with The Fuller Center over the years at doing exactly that.”

Learn how your school can use The Fuller Center for service-learning trips.

In this video, Mercer students talk about their recent trip to India with The Fuller Center: