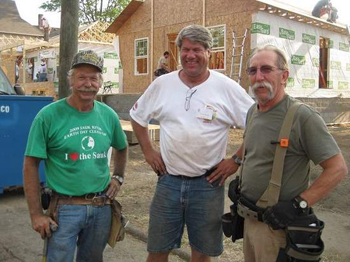 During the week of Sept. 6-11, The Fuller Center for Housing built, renovated or dedicated homes for at least 100 low-income families as part of the second annual Millard Fuller Legacy Build. Three men from South Haven participated in the effort, traveling to Indianapolis to do so.

Tim DuBois, Jim Tomascak and Charlie Thell worked at the epicenter of the project, participating in the construction of eight new homes and the renovation of 17 others. DuBois, Tomascak and Thell helped improve the face of an entire neighborhood among more than 1,000 volunteers across the country and around the world, working on homes from Idaho to Sri Lanka.

The event honored The Fuller Center’s and Habitat for Humanity’s late founder, Millard Fuller, and his vision of eliminating poverty housing.

Volunteers in Indianpolis used hammers, paintbrushes and more helping the 25 partnering Indianapolis families. At the week’s end, volunteers saw their work come to a conclusion as they took part in the dedication ceremony on Sept. 10 after five days of building. Continue reading>>

Click here to donate to, get involved with, view photos or learn more about the Millard Fuller Legacy Build.

View the article as it originally appeared here.