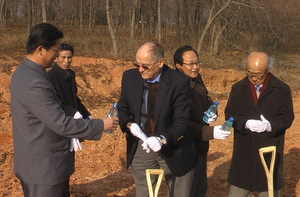 Volunteers from around the world will start building 50 houses in North Korea later this year, a rare opening for international cooperation in the isolated nation.

South Bend architect LeRoy Troyer, chairman of the Fuller Center for Housing that organized the project, participated in a groundbreaking in November, culminating two years of negotiation and preparation.

"The thought was if we could build houses and work together in a volunteer program, people-to-people, that would also help build peace," Troyer says. "To work together, you have to have relationships. Hopefully from that will grow peace."

The Fuller Center is partnering with the Paektusan Academy of Architecture for the project, using green building technology in the cluster of houses for farmers in Osan-ri near Pyongyang.