My name is Justin, and I am joining the bike adventure for a short time this summer, the culmination of a few years of haranguing by some friends and personal pledge I made to myself to discover more of the world around me. I work in Chicago as a teacher, and I like to fancy myself a chef, but those things hardly seem important out here. What I have experienced most and what I will most fondly recall from the Fuller Center Bike Adventure are not the sights, though they’ve been breathtaking (any disparaging of Ohio and Indiana you hear from anyone else is much overblown), nor the smells, which have been, to put it lightly, diverse, nor the bodily feelings of pain, soreness, hunger, satiation, and hugs, but rather, above all these other senses, it will be the sounds.

The Fuller Center Bike Adventure is a cacophony of different sounds. There are bike sounds, such as the satisfying click-clack of special bike shoes sliding into place on touring pedals designed for people who mean business. There was also that weird clicking sound my bike made for around 20 miles outside of Sandusky, but then it went away, so it’s probably fine, right? There is the beep-beep-roar of the support van just before it passes you between rest stops (this is also your cue to either smile or look intense, as one of the trip photographers is sure to be hanging out the window to capture your biking essence as they pass). Each person, too, has their personal sound, and I have found delight in all of them – the mirthful joy of a mid-ride harmony carried forth by a Scot-Aussie, the easy banter of old friends, and even the austere and monosyllabic gruffness of a Texan itching to hit the trail (a special note should also be made for the joyful jabber of a certain Toledo resident whom I believed talked off roughly 28 sets of ears this past weekend). These sounds I will not soon forget.

But truly, truly a blessing has been in the absence of sound. I was lucky enough to be present and be thanked by a wonderful couple on whose house the Fuller Center had completed a wonderful day’s worth of work. While we all hung on their every kind word and tried not to grow headstrong over their effusive praise of the Fuller Center’s mission, no words in any language could match the power and grace of a lightning quick inhale, the kind one takes when trying to find the words to express gratitude, but must take just a second to be overcome by the emotion of the moment. It spreads like a wildfire of loving emotion that cannot and will not be contained. That is no ordinary silence, and to live in it for just that split second evokes feelings that can last infinitely longer. But that, still, is not the most powerful and genuine silence I have discovered. 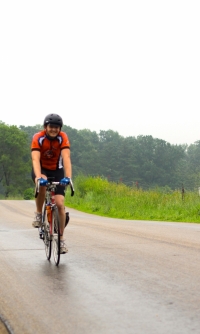 That particular silence snuck up on me today while I was riding solo through a long stretch of beautiful Ohio farmland. It came between the passing of cars and trucks, at a time when the road, straight and smooth, was laid out perfectly before me in a bright June sun that danced upon the cows and corn and forest. This silence even managed to avoid one of the many moments I have had to yell “shut up legs!” at my mortal lower half as it waged its silent, throbbing protest against the continued mileage.
It was not a silence, like so many others in my life in Chicago, to fill with anxious thoughts about my job, or my personal life, or the many mental minutia that generally rage within my subconscious at any given time. Nor was it an uncomfortable silence of modern living, the kind to drown out with a sixth re-watching of a favorite show on Netflix or my favorite playlist off my phone. No, it was a silence that came and passed, and likely looked to any passerby like any normal silence on any normal day of any normal guy out riding his bike in a weird orange shirt. But to me, and I am not sure I could realize this until after its passing, it was a silence of pure contentedness. There was the road, myself, and bliss. I had exhausted away absolutely everything else, and found a tiny moment to just be. It was a silence that is no guarantee to be a regular visitor to any person’s life. That was a silence worth pursuing through all the rain and heat and labor and miles that this trip (and probably next year’s, if I can manage it) can throw at me. I would highly encourage anyone curious enough to also seek it to sign up and join the Fuller Center. You too might be surprised by what you discover out here on the road.