The second Fuller Center Bicycle Adventure will hit the road July 10 and arrive at the ocean Aug. 16, 2009, turning last year’s coast-to-coast trip on its head. Cyclists will pedal 1,300 miles down the country, from Benton Harbor, Mich., to Tallahassee, Fla., and work on six to eight Fuller Center projects over five weeks. The fully-supported ride is now officially an annual event, intended to raise awareness about The Fuller Center and to raise funds for its projects in the U.S. and abroad. 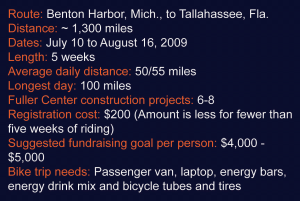 The 2008 bike adventure raised more than $134,000 (including the donation of two houses) over eight weeks and 3,300 miles. The goal for the 2009 trip is to raise $200 thousand for simple, decent housing. Because the cyclists live simply – they sleep in churches and cook their own meals – the vast majority of donations go toward building and repairing homes, not paying for the riders.

If you have a few weeks free this summer, like to ride your bike and believe in raising money for an important cause, join us to dip your front wheel in Lake Michigan and your back wheel in the Gulf of Mexico. If you don’t have much time, join the team for some of the sights in between. Riders are welcome to sign up for a day, a week or the full five weeks.

This year’s shorter trip intends to appeal to those who don’t have eight weeks free this summer, don’t want to pedal over three mountain passes in a single morning and who don’t like averaging 80 miles per day. It will also route the cyclists through 14 Fuller Center partners, enabling them to lend hammers and hands to projects that will provide needy families with a safe, affordable place to call home. 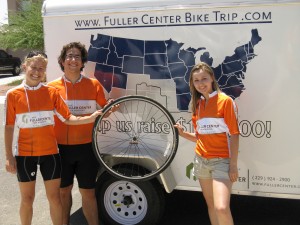 Even if pedaling 55 miles per day isn’t your thing, there are still ways you can help! The bike adventure needs support in the form of monetary donations, people willing to spread the word about the trip and in-kind donations of a passenger van, bicycle equipment and energy food.

Contact Ryan, the trip coordinator, for more information:
bike@fullercenter.org or 229-924-2900

For more photos of the 2008 trip, visit our bike adventure gallery.