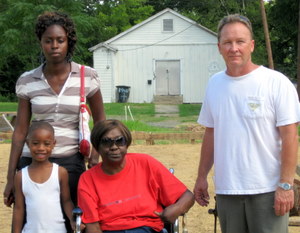 When Marion Sullivan and 19 of her family members fled from Hurricane Katrina, she prayed they’d make it to Shreveport safely.

"I started crying and thanking God," she said. "I know he was responsible for getting us here."

Sullivan is a recipient of one of two houses constructed Monday during the inaugural Millard Fuller Legacy Build.