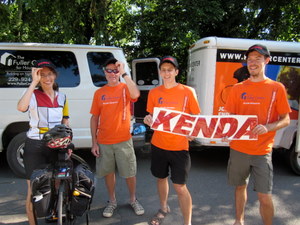 I’ve noticed that I tend to avoid large groups of people. Just ask my roommate, who invites me to contra-dancing and other fun events (which involve large groups of people) at least 4-5 times before I go along.. if at all! But throw bicycles into the mix, and I’m there! I’ll even take time off work and bike 40 miles out of the city just to meet a large group of people I don’t know.. when it’s hard to get me out of the house for a neighborhood block party just up the street. What the heck? Maybe I’m crazy about biking… Or maybe cyclists are special people?

Well, even if all bikers are special, the Fuller Center group outshines them all. They bowled me over with their grand welcome and immediately made me feel like one of them… even though I was biking with them for just one short day! When I pulled into the parking lot at the church where we would be sleeping last night, Ryan, Chris, Brett, and a few others were waiting there for me with a big banner that (sort of) said my name on it, and cheered and clapped as if I was finishing a race. Then I was outfitted with a shirt, jersey, hat, and water bottle so I would blend right in. Everyone introduced themselves to me and I learned their names in record time. Leah’s in particular, who ran to greet me so enthusiastically that I worried we already knew each other and I’d forgotten her name! After dinner, many of us went out on the town of Leesburg, Va., and I learned their stories over drinks and music: all about their falls and injuries, interests and hobbies, grad schools, triathlons, and future plans. 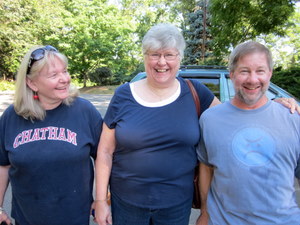 The next morning, we circled up in the parking lot while Tony read us some geese wisdom. Then Abby, Melissa, Leah, Tom and Sarah all spoke, since this would be their last day of riding, too. Ryan pointed at me and said I had something exciting to share. Oh yeah, I said. I held up my bike odometer and announced that, as it so happened, I would be hitting my 10,000th mile with them, towards the end of our ride that day. They shared so readily in my excitement, they got me even more excited. Then, when I was just one mile short of the much-anticipated 10K in Manassas Park, they biked with me an extra half-mile up-and-down the street, cheering and yelling when I hit the four zeros while Kelli carefully documented the whole thing (view the result of that here!). I was almost embarrassed, but glad they made such a big deal out of it. After all, avoiding that many miles worth of carbon emissions should be celebrated! 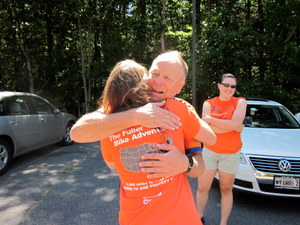 I said my good-byes a few hours later, once everyone had showered and re-grouped. It was all over in a whirlwind, as I started away on my 40-mile ride home. Oddly, I felt myself get more and more melancholy the farther away I got. When I encountered a gaggle of geese on my path, I knew why: I missed my group! "My" group? Indeed, after not even 24 hours, I already felt that connected to them.

Thanks for the ride, Fuller Center, and good luck on the rest of your journey, to New Orleans and beyond! You are wonderful.