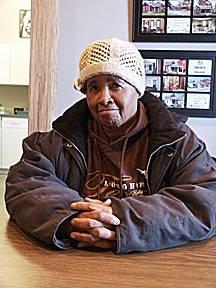 Shirley Dardy leads a quiet life, but that hasn’t always been the case.

She moved to St. Paul Street with her husband, Velmon Dardy, in 1997 to get away from the turmoil in their old neighborhood at 22nd and Central. Velmon Dardy loved to fish. “All his friends called him ‘The Fisherman’.”

Shirley says her husband was attracted to St. Paul Street’s proximity to the stream called Pleasant Run, “but mostly he fished at the White River near Riverside Park.” Velmon Dardy died in 2005. He and Shirley had worked hard and paid off the loan on their house on St. Paul. That’s what Shirley Dardy likes most about her house.

When the Dardys first moved to St. Paul to escape the noise and violence of 22nd and Central they found their new neighborhood was not as peaceful as they had hoped. There were lots of people “messing around and causing trouble.” She was one of the few homeowners in the area and she took part in the neighborhood meetings on adjacent Churchman Avenue. Gradually things got better on St. Paul Street, mostly because “the bad people left.” Now Shirley Dardy would like to have some neighbors. She says it’s quiet on St. Paul Street “because nobody lives there.”

Shirley Dardy spends most of her day reading the bible. She attends the King’s House of Prayer on Prospect Street and likes the fact that she only has to walk a few blocks up the street to church. Her house was too big for her to maintain on her own so she has a boarder who she refers to as “the Older Gentleman.”

The Older Gentleman tends a garden in the backyard and does most of the cooking. Aside from those activities he seems to play a minor role in Shirley Dardy’s household. She talks happily about her dogs (four in all, including “the two cutest puppies”) and her children and her work with church groups and the “Mother’s Club” she attends at 10th and Dearborn Street. She says her house needs some work. She would like to patch the roof, fix the cracked ceilings, take down the dark paneling and brighten up the rooms. She says she can’t do much fixing up around the house anymore, “I’m just waiting for Jesus to come back.”