Hey y’all, Dani here! For those of you that don’t know, I am a whole way rider this year. Iin fact, this is the second time I am biking all the way across the country with the Fuller Center. My first ride was way back in 2008, the inaugural trip! 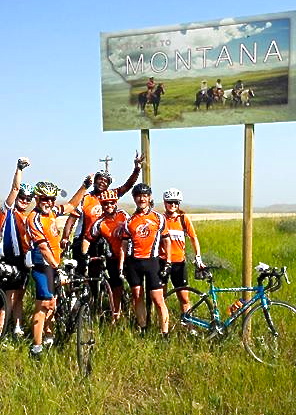 Today as I pedaled my way across another state border with a group of nine other riders I had some time to think about the ways this trip is the same and also ways in which it has changed since that first ride. The most glaring difference is the sheer number of riders we have this year! On the first trip we only had eight people making the cross country journey and we never had more than two segment riders at a time. This year we have at least 30 people at a time! Besides the fact that the group has grown, it is also better organized (no offense, Ryan!). I still remember the days, on my first trip, when our fearless leader would be on the phone that day with churches in the town we were headed to, searching for a place for us to sleep! Not to mention the time we accidentally stayed in the wrong church, or the time we ended up in a cow pasture. Gone are the days of hand-drawn maps photocopied and passed out to riders; in are the days of iPhones and receiving the route via email the night before!
As you can imagine, there have been many changes! But, I am mostly thankful for all the ways in which the ride has stayed the same. No matter what level of biker you are, or how much you trained, this ride will push you, there will be times when you want to get off your bike and cry, there will be times when you will get off your bike and cry. It doesn’t matter how many miles we have under our belts, a ride into 25 mph headwinds will push you to your breaking point.

But the fact is, the tough days bring us together as a group; we inspire one another with strength, lift each other up with song, and distract ourselves with stories. It is also on those tough days when we start to reflect on why we are all doing this, why we are getting up day in and day out to ride our bicycles, and what made us register in the first place. Sure, we wanted to see America, and it has not disappointed with its stunning views, rolling hills, and farms, but the real reason we are all here is because we wanted to have some small part in the Fuller Center’s mission to eliminate poverty housing.

Which brings me to the second thing about this trip that thankfully has not changed. We are visiting towns many people overlook, towns that have been hit by hard times, and towns that people have walked away from inspired by the work of the Fuller Center’s covenant partners. We have all heard our trip leader, Melissa, explain what the Fuller Center is to countless churches at this point in the trip, and I think at this point we all understand that the Fuller Center does more than build and repair homes; it inspires change in both the families that receive homes and the communities in which the builds take place. The simple truth is that when someone does not have a simple decent place to live, they struggle to prosper in all areas of their lives.

On my first trip across the country I was blessed to meet one of the men who was with Millard Fuller since the beginning, walking across the country with him to raise money for Habitat for Humanity. His story is the perfect example as to why the mission of eliminating poverty housing is so important. Many years ago he was working on a home repair for a family that consisted of two grandparents and all eight of their grandchildren. The house they were living in had a leaky roof so all of their mattresses were placed in the only room in the house which did not get soaked through by rain. Worse than that though, the house did not even have indoor plumbing. Jack and his team came in and repaired the roof, installed plumbing, worked alongside the grandparents, and played with the kids. He left knowing they had done a good job, and put the house and the family in the back of his mind. Then, years later he was in the ICU with his wife who was suffering from a terminal illness. Much to his surprise, the nurse who was aiding both him and his wife during her final days was one of the children from that house he had helped repair all of those years ago. She told him had it not been for his team coming and fixing her house she would not be a nurse. When they fixed the roof on her house they showed her that people cared and that she mattered; had they not done that she would not have been there to help him through the passing of his wife.

The final thing that has not changed (yes, I am nearing the end of this blog!) is how this ride restores your faith in people. Every night a new church opens up their doors to a group of thirty smelly strangers, they cook us dinner, listen to our stories, and show us time and time again that there are still kind and generous people in this world. The covenant partners we meet are doing their part to change their communities and it is inspiring. And the riders, different in many ways, are all strong and beautiful people who I am so thankful I have met! Let’s just say I am glad I quit my job and took off across the country this summer!