One of the best ways to appreciate home is to have a brush with losing it.

That’s what Alex Lockwood, whose hometown of Ringgold, Ga., was recently devastated by a tornado, will 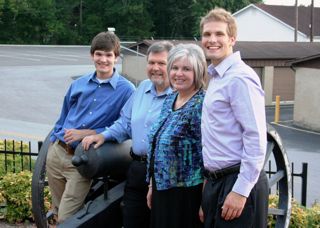 Lockwood, who’s studying economics, accounting and finance at Mercer University, was taking his final exams when he received news that his town had been struck by the storm that caused eight casualties and 30 injuries.

“It was a really strange thing,” he said. “I had several people text me, but I couldn’t contact my parents because all the lines were down. I got on the Internet right away and couldn’t pull myself away. It was really strange because I didn’t know how bad things were.”

He found that out just a week later.


“There are really no words for it. I was coming home at night, and right when I got off the exit there were no lights. It was like a ghost town,” Alex said. “The downtown was flattened, the middle school and high school were flattened. All of these landmarks from childhood were all gone.”

“In effect, I’ve kind of lost part of my childhood. It was just swept away.”

Lockwood said his parents had just moved to a different house three months ago. They were in the house packing up boxes at the old house when the funnel cloud formed directly overhead. The tornado then touched down just a mile from the Lockwood’s new house.

“It hit a lot of poor areas – a lot of people didn’t have insurance. But we live in a small town and people are very willing to help each other. A lot of churches stepped up to help.”

Lockwood said ultimately the storm has made him feel grateful for what he has – and what he almost lost.

“We were dangerously close to losing everything. It definitely makes me appreciate what I have more,” he said.

In just a few short weeks, he’ll transfer that gratitude into action in Armenia, where he’ll help build homes for families in need on a Fuller Center Global Builders trip.

“As Millard Fuller said, everyone deserves a simple, decent place to live,” he said. I definitely agree with that. And knowing people whose lives were wrecked will change my perspective.”

Start a Covenant Partner in Ringgold to help rebuild the community

Read more about the storm that hit Ringgold here

Find out more about Global Builders-Armenia