Dr. Richard Semmler likely is one of the most generous men in America, proportionally speaking.

He is not a rich man — although he might would be if he had not given more than $1.3 million in his lifetime to charities. Fortunately, Dr. Semmler measures his wealth in terms of lives impacted, not in dollars hoarded. 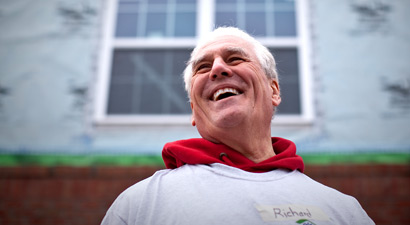 He has impacted many lives by teaching mathematics at Northern Virginia Community College, but he has empowered many more with his generous donations and tireless volunteer service from building homes to feeding the homeless.

“He likes to give — but not just money,” Fuller Center for Housing President David Snell said of the man who lives so frugally that he has no cable or internet in his home, which is furnished with items from a thrift shop, as is his closet. “He spends an enormous amount of time volunteering to help the homeless and other causes. He understands you can’t take it with you, so he wants to give as much to help folks out there as he can. He has been a consistent friend of The Fuller Center.”

Dr. Semmler’s latest gift is a $40,000 donation to The Fuller Center for Housing to be used as a matching grant to kick-start the “40 Years in Africa” campaign. The campaign marks 40 years since Linda and Millard Fuller picked up their family and moved to Zaire in the heart of the continent to start a partnership housing experiment that would become the foundation of the world’s affordable housing movement. The Fuller Center campaign aims to build 40 houses in honor of the anniversary.

“Our goal for the campaign is to raise $160,000, so this takes us a quarter of the way there — and we’re asking folks to match it, which will take us halfway there,” Snell added. “He’s given us a launching pad for this ’40 Years in Africa’ campaign. And this is money that’s going to go straight to our programs in Africa.” 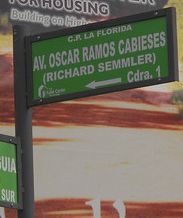 The $40,000 donation puts Dr. Semmler over the $100,000 mark in donations to The Fuller Center, which he began supporting upon learning about it in late 2010 when he gave his first $6,000 to sponsor the building of a Fuller Center house in Haiti.

“He is a beautiful man with a beautiful heart,” said Peter Salemme, a frequent Fuller Center volunteer who also is from Northern Virginia and who lives in a Habitat for Humanity house that was built with the support of Dr. Semmler and other Fuller Center benefactors such as Karen Warkentien “The main thing I would say about Richard is he is selfless and cares more about others than himself. I think the Jesus message of unconditional giving is what Richard aims for. He’s a great example for others.”

Salemme has been on numerous Fuller Center builds and was a house captain in Peru during the 2012 Millard Fuller Legacy Build, where multiple houses were sponsored by Dr. Semmler. For his staunch support of the build, Dr. Semmler also had a street named after him in the village of La Florida where The Fuller Center works.

Thanks to Dr. Semmler’s donation, your gift to the “40 Years in Africa” campaign will be doubled up to $40,000 through July 1. Click here to contribute.

Click here to read more about Dr. Semmler in this 2011 Fuller Center article.

Watch this Chronicle of Philanthropy video about Dr. Semmler’s generosity: